Wasim Akram escapes terror attack on him in Karachi

Wasim Akram escapes terror attack on him in Karachi

Pakistani cricket legend Wasim Akram’s car was attacked by unidentified men at Karsaz Road near National Stadium in Karachi. The assailants hit Akram’s car and opened fire at him when he walked out of his car.

The incident happened on Wednesday evening and he remained unhurt. As reported by Tribune,Akram called police and registered a complaint. Akram was returning from the stadium where he was training the fast bowlers, when two unidentified armed men on motorcycle opened fire at his vehicle. The police are investigating the matter. Akram said that he had noted down the vehicle numbers and given it to police. 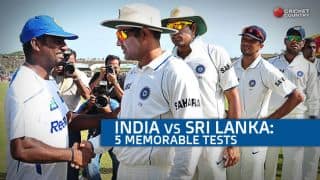 Bangladesh women’s team to be provided security for Pakistan tour