It’s not very common for cricketers finding themselves in the other side of the law. But not in this case. West Indian cricketer Andre Fletcher was reportedly arrested on Thursday for illegal possession of ammunition at the Charles Douglas Airport in Dominica.

As reported by dominicanewsonline.com, 50 rounds of ammunition were discovered with him. He was practising with the Windward Island Volcanoes team for several days and has been in Windward for a long time. Lockhart Sebastian, the manager of the Windward Island Volcanoes team has assured complete support to Fletcher. He said, “I will support him, I will not abandon him that is the job of a manager.” Sebastian also said that Fletcher was about to leave the country at the time he was arrested.

Fletcher has been reportedly detained at the Calibshie Police Station and will be presented in front of the court in Wesley on Friday. Making his international debut in June 2008, the 27 year-old wicket-keeper batsman has featured in 22 Twenty20 Internationals (T20Is) and 15 One-Day Internationals (ODIs) for the West Indies. Earlier this year, he also featured in the T20I series in South Africa. 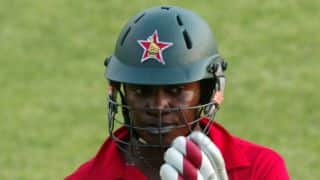