Many few had an impact on opposition like Sobers, who has numerous records scripted to his name and was the backbone of West Indies side for many years.

West Indies legend Garry Sobers widely regarded as the greatest cricketer of all time, turned 80 on Thursday; he is without a doubt one of the finest all-rounder s to have played the gentlemen s game of cricket. Many few had an impact on opposition like Sobers, who has numerous records scripted to his name and was the backbone of West Indies side for many years. READ MORE: Garry Sobers: 10 anecdotes about the greatest all-rounder the world has seen

Sobers represented West Indies in 93 Tests, in which he amassed 8032 runs at an overwhelming average of 57.78. He also had 235 wickets to his name at 34.03. He could bowl pace, left-arm orthodox and chinaman. Sobers played just a solitary One-Day International (ODI) game in his career in which he got out on a duck and scalped one wicket. READ MORE: “Not so sober!” Virender Sehwag to birthday boy Garry Sobers

On his 80th birthday, Twitter was flooded with good wishes and thoughts. Take a look at some here:

Only the living get old!Many Happy Returns o Day Sir Garfield!Crkt World’ll never C Gr8 Allrounder like him!Was delight 2b punished by him!!

Happy Bday Sir Gary Sobers.The way u destroyed opposition with ur batting& bowling they wud hav never said u r Sober pic.twitter.com/Onh6CzTbPG

Sir Gary Sobers, one of the all time best alrounder in cricket history pic.twitter.com/QJsSgb0WOj

#GarySobers I am not fortunate in watching him playing live but now watching his highlights … Can’t forget 6 ..6s and his bowling style

Gary Sobers is 80. Saw him play, saw him at the races. He made Malcolm Nash into a minor celebrity.

Sir Gary Sobers, IMO greatest cricketer ever, turns 80 today. Piece on him I did in 2010: https://t.co/dsMFnkcWV7 pic.twitter.com/BHi0mG0Pwx

. Happy Birthday Sir Gary Sobers….the Greatest there ever was #Cricket

Happy Birthday Gary Sobers He smashed 365 in Test cricket at the age of 21 which remained as World record for 36 years..

I CAN still visualise Gary Sobers as I saw him playing in that long ago summer of 1973. I know I was blessed to witness a true sporting God. 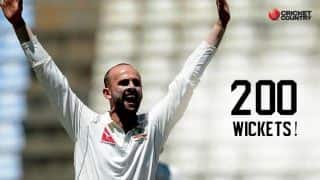