The Jamaican, who is out of the South Africa tour nursing an injury decided to play Santa Claus, a day before the Christmas eve.

Over the years, the sport has seen interesting characters and West Indies batsman Chris Gayle is definitely one of the most colourful ones. He is among the most popular ones and when it comes to the Twitter space, he is the king.

The Jamaican, who is out of the South Africa tour nursing an injury decided to play Santa Claus, a day before the Christmas eve.

Gonna do a bit of Christmas shopping later, y’all need anything? Just #SantaGayle if u do.

The left-hander began getting instant replies from around the world but mostly from India, where he’s got a huge fan base thanks to the Indian Premier League (IPL). Gayle, who started his IPL career with Kolkata Knight Riders (KKR) in 2008, has been a part of Royal Challengers Bangalore (RCB) since 2011 and has been phenomenal. In April 2013, he scored the fastest ever limited overs hundred off just 30 balls, as he ended up with an unbeaten 175 off just 66 balls, against Pune Warriors. Gayle got some interesting requests:

@henrygayle How about an Xbox 😉 #santagayle… Your friend all the way from india!

The hashtag #SantaGayle, soon began to trend in India, after which Gayle tweeted: 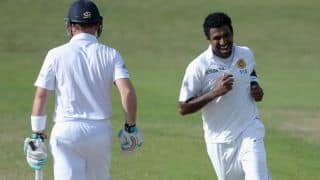 New Zealand vs Sri Lanka 2014-15: Does the Lankan attack have the venom to excel Down Under?