When Dale Steyn hates bowling to AB de Villiers
By

Dale Steyn and AB de Villiers are set to celebrate 10 years of Test cricket when they play the first Test against West Indies at Centurion on Wednesday. In 2004, the pair made their Test debuts against England at Port Elizabeth, exactly on December 17.

As reported by Espncricinfo, Steyn acknowledged de Villiers as the “best batsman in the world.”

In the Indian Premier League (IPL) matches, de Villiers, who plays for Royal Challengers Bangalore (RCB), has been very severe on Steyn, who plays for Sunrisers Hyderabad (SRH).

Ten years after their Test debuts, the pair has come a long way. Steyn is regarded as the best fast bowler in the world with 383 wickets from 75 Tests, while de Villiers undoubtedly is world’s best batsmen with 7296 runs from 95 Tests. The pair has been successful in all formats of the game. 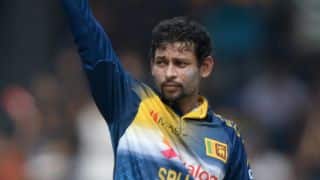