Umpire Ahsan Raza returned to umpiring despite getting hit by bullets.

Six years have passed by but the 2009 terror attack in Pakistan is still fresh in the minds of fans. The dreaded attack on Sri Lankan team’s bus killed two civilians and six policemen, and injured cricketers too. Pakistan didn’t see international cricket being played there since then, till Zimbabwe agreed to tour them this year and the nation hosted its first international game since the ill-fated incident on Friday, May 22.

Umpire Ahsan Raza returned to umpiring despite getting hit by bullets. He thanked the laws of cricket book for living today.

“When the bullets were fired, I had the ICC’s rule book in my pocket which stopped the bullet from penetrating directly into my chest, otherwise damage could have been severe,” Raza was quoted in a report from cricket.com.au.

“There was another bullet which damaged my lung. The match referee Chris Broad then lay on my stomach which stopped blood from dripping. After that I received 22 bottles of blood,” he added.

Raza, thrilled to be back, made his international on-field umpiring debut in the first international match in Pakistan in six years.

After undergoing rehabilitation, the 40-year old became the third official for Pakistan’s matches in the United Arab Emirates (UAE) against New Zealand. The passion for cricket shown by Raza was incredible as the doctors too didn’t have many hopes.

“In the last six years I had a drastic change in my life. Those two bullets made me suffer a lot and if you could have seen those 80 odd stitches on my tummy you will feel amazed at how I am standing here,” Raza explained.

“The doctors thought I would not be able to stand as an umpire but my passion for cricket made me stand on my feet again,” he further added.

It was all smiles for the whole Pakistani crowd at Gaddafi Stadium, when the host nation defeated Zimbabwe in the first Twenty20 international (T20) match by five wickets. The second T20 will be played on Sunday. 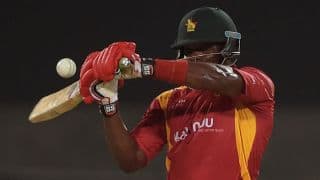