Known for his slow batting, Misbah's 56-ball century has changed everything.

A month ago he sat out of a One-Day International (ODI) against Australia for poor form. Fans and critics were demanding Misbah-ul-Haq to be sacked from Pakistan Test and ODI captaincy. They called him ‘tuk tuk‘ for his slow batting. But it took just one day for fans and critics to completely change their perception about Misbah. In the first innings of the second Test against Australia in November 2014. Misbah equalled Viv Richards’ world record of fastest Test hundred achieving it in just 56 balls. The above quote is what Younis Khan had to say about the Pakistan skipper after the end of second day’s play of the first Test between Pakistan and New Zealand. 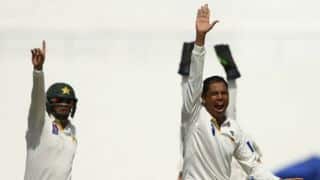