Tendulkar was present their in the capacity of co-owner of ISL team Kerala Blasters, where as Rajinikanth was a special invitee.

Indian batting great Sachin Tendulkar has fans across the globe. His followers worship him and can even happily die just to meet him once. Interestingly, a person with such massive following is also somebody’s fan. Yes, Tendulkar admires Rajinikanth and has said on multiple occasions how much he admires him and his humility. So, it became a moment to remember when the two recently met on the sidelines of the opening ceremony of the second season of Indian Super League (ISL) in Chennai.

The two legends met during the ceremony and instantly hit it off very well. Tendulkar was present their in the capacity of co-owner of ISL team Kerala Blasters, where as Rajinikanth was a special invitee. Rajinikanth was among the various big personalities from diverse fields who marked their presence for the function. Tendulkar posted his picture with the legendary filmstar from the south on his official Twitter account, saying,”Mr. Rajinikanth’s enthusiasm was infectious at the #ISL opening ceremony. Wishing all the teams the very best!” 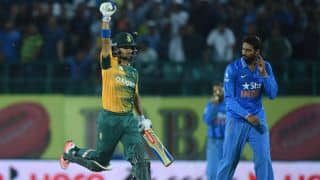