Virender Sehwag reveals another interesting anecdote from his playing days.

Former India cricketer Virender Sehwag is not only known for his audaciousness on the field, but the maverick player has been a rich source of entertainment in the commentary box as well as on the social media. Sehwag has been commentating in Hindi during the home Tests for India, and his one-liners, anecdotes and straight-forward observations have been quite amusing to listen to. For those who have been in the impression that the dashing batsman has started enjoying more on work only after his retirement could be grossly wrong. FULL CRICKET SCORECARD: India vs England, 3rd Test at Mohali

Sehwag, as we all know, has been the aggressor in the Indian camp which played a massive role in their rise across formats. His explosive batting provided necessary impetus most of the times when he came out to bat, but there was a different side of Sehwag which not many were aware of during his playing days. After he had completed his double-century in ODI cricket, it was revealed that Sehwag was singing songs en route 219 against West Indies at Indore, but was he the same comedian who has been the best entertaining figure among the retired cricketers?

Wish we could have asked this question to the late English umpire David Shepherd, who was once subjected to a stinging one-liner by the Indian cricket. Shepherd was certainly a no-nonsense umpire; one of the best ever seen. But on this occasion, the umpire fielding at square leg was slightly taken aback with what Sehwag said. Virat Kohli reveals how hard it was for him to maintain the strict fitness routine

Sehwag, speaking at a function in Mumbai while inaugurating the Goregaon Sports Club Premier League Season 2 revealed details of this particular incident. I was at square leg during a match when David Shepherd was standing near-by. I went up to the umpire and asked, When are you delivering the baby , pointing his bulging tummy. Sehwag added that Shepherd was sporting enough to take the joke in spirit. 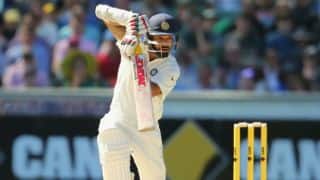