Long tours can be taxing and that is where camaraderie between the cricketers play an important role.

Long tours can be taxing and that is where camaraderie between the cricketers play an important role. Australian cricketers on this occasion were spotted having fun but the activity was totally out of the box. In a post from Peter Nevill on his official Instagram account, he was spotted receiving haircut from teammate Moises Henriques while Usman Khawaja was looking on and having a laugh. Also Read: Cricketers’ love for Tuk Tuk

Nevil captioned it as: “The most accomplished barber I know in all of Kandy… And@usman_khawajyThanks @mozzie21,” Also Read: ‘Pictures like this’ make David Warner’s day when he is away

Earlier, Usman Khawaja was also spotted squeezing Adam Zampa on his ODI debut, which made rounds on the social media. The picture above is an amazing moment for the Australian fans as they can see their stars having a ball amid all the pressure of the high-voltage series. Australia will play a total of three Tests, five One-Day Internationals (ODIs) and two Twenty20 Internationals (T20Is) in Sri Lanka. Australia look good at the moment after winning the tour match, the first Test commences on July 26. 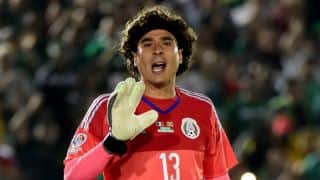 Granada rope in Guillermo Ochoa from Malaga on loan