The petitioner termed the remarks indecent and said they were made deliberately to increase the popularity of the show.

Jodhpur: In fresh trouble for cricketers Hardik Pandya and KL Rahul and filmmaker Karan Johar over comments on women made on a television show, the police here have registered a case against them.

The two cricketers were made to sit out of the India-Australia ODI series and were briefly suspended by the BCCI after a row over their comments on a popular television chat show, which many thought, were sexist and vulgar. The FIR was lodged on the directions of a magistrate’s court, Luni station house officer Bansi Lal said Wednesday.

Local resident DR Meghwal had approached the court seeking an order for the police to register a case against the three men. The petitioner termed the remarks indecent and said they were made deliberately to increase the popularity of the show. (ALSO READ: Hardik Pandya, Krunal Pandya become third pair of brothers to feature in the same match for India)

In his complaint, Meghwal said Johar deliberately presented content that humiliated women. He referred to the content as promiscuous and gender-biased in nature.

Meghwal had filed another case against Pandya last year, complaining about the cricketer’s alleged comments on Twitter against Dalit icon BR Ambedkar. Pandya had rejected that allegation, saying the Twitter account did not belong to him.

After the row over the celebrity chat show, Pandya had apologised for his remarks.

The Board of Control for Cricket in India (BCCI) called the two players back from the Australia tour and placed them under suspension. The suspension was lifted after the BCCI’s Committee of Administrators approached the Supreme Court, asking it to appoint an ombudsman to inquire into the matter. (ALSO READ: Hope India will sort the Hardik Pandya-KL Rahul controversy soon: ICC CEO David Richardson)

In a television interview, Johar too expressed regret saying he felt responsible for what the two cricketers were going through. Meanwhile, the BCCI has considered behavioural counselling for young cricketers. 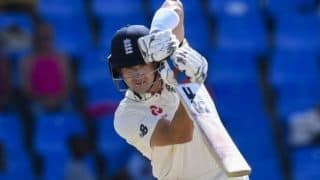