It’s safe to say that Chris Gayle is the greatest Twenty20 (T20) batsman of all-time. He has been successful in T20 Internationals, being a part of Darren Sammy’s World Twenty20 Championship winning side in 2012. In fact, the Jamaican has the most runs in the format.

It’s safe to say that Chris Gayle is the greatest Twenty20 (T20) batsman of all-time. He has been successful in T20 Internationals, being a part of Darren Sammy’s World Twenty20 Championship winning side in 2012. In fact, the Jamaican has the most runs in the format. He has 7332 runs from 203 matches and those runs have come at an average of over 42 and a awesome strike-rate of close to 148.

He is by far the most successful batsman in the Indian Premier League (IPL). Gayle is the third highest run getter in IPL, behind Suresh Raina and Rohit Sharma. While Raina has 3581 runs and Rohit has 3246 runs in 125 and 122 matches respectively, Gayle has 3246 from just 76 games. He averages close to 48 and has a strike-rate of over 155.

May 6th, was an eventful day with Salman Khan ruling all the headlines, While the discussions surrounded around the star’s sentence to ‘jail’ and ‘bail’, later in the evening the spotlight was on Gayle. He struck his fifth IPL hundred against a listless Kings XI Punjab (KXIP) side to elevate his side Royal Challengers Bangalore (RCB) to the third position in the points table.

Suvajit Mustafi lists out the five three-figure Gayle storms that struck the IPL.

He wasn’t picked in the auctions and his former side KKR didn’t retain him. In his former home ground and against his former side, Gayle smashed his first IPL hundred. He made the chase of 173 look easy as he struck 10 fours and seven sixes in his knock of unbeaten 102. RCB sealed it off in the first ball of the 19th over.

It was a brutal knock and no bowlers from the Punjab unit were spared. He made a conscious effort to better his previous hundred and brought up his century from just 46 balls. This was his first hundred in Bangalore and he struck as many as nine sixes and 10 fours. RCB rocketed to a total of 205 and won the match by 85 runs.

Gayle struck 13 sixes this time and equaled the record of Brendon McCullum for most number of sixes in an IPL game. RCB were looking for a much-needed win at Kotla and Gayle had just provided them with the platform. Gayle’s unbeaten 128 took RCB to a massive total of 215. He and Virat Kohli added an unbeaten stand of 204 for the second wicket as RCB managed a 21-run win.

It rained records that day in Bangalore. Not only Gayle scored the fastest Twenty20 hundred from 30-balls, he also went on to score the highest ever T20 score. His unbeaten 175 remains the highest till date. It was a day, nobody wanted to be a bowler as Gayle went on to strike 17 sixes and 13 boundaries. His knock helped RCB to of 263, the highest in this format. It was a day when he could do nothing wrong as he went on to pick up two wickets too as RCB cruised to 130-run win.

Gayle hasn’t been in best of shape and fitness. But he stood and delivered, striking 12 sixes and seven fours in a brutal knock against Punjab. While RCB posted 226, KXIP folded for 88 — 29 short of Gayle’s total! Co-incidentally, Gayle’s second hundred came against the same side, on the same day in 2011 and at the same venue. Another interesting trivia is that even in that game, Sreenath Arvind picked up four wickets, like he did on Wednesday.

12 Sharmas who have played for India 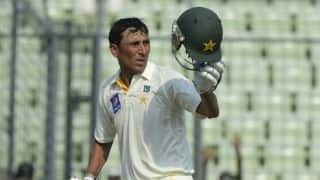