Chris Rogers, born August 31, 1977, is an Australian cricketer, a left-handed reliable top-order Test batsman. Suraj Choudhari lists 17 interesting facts about the man whose services will be dearly missed by Australia.

8. Australian contract: Rogers was the leading run-scorer in First-Class season of 2006-07 with 1201 runs at an average of just over 70. The successful run earned him a contract from Cricket Australia.

9. International debut at 30: Despite being a consistent run-scorer in First-Class cricket, Rogers donned the Baggy Green at the age of 30. He made his Test debut against India in January 2008 at Perth.

10. No 399: Rogers became the 399th Test player for Australia when Matthew Hayden pulled out due to an injury against India.

11. Comeback after five long years: After making a debut against India in 2008, Rogers remained out of the side for five years. He was recalled into the Test side for the 2013 Ashes in England.

12. Highest score in his final series: Rogers slammed an emphatic 173 in the second Test of the ongoing Ashes at Lord s which is also his highest score in Test cricket.

13. 45 Test innings before his first duck: Rogers played 45 innings without getting out on a duck; his terrific run was shattered by Stuart Broad, who got the better of him in the fourth Test of the ongoing Ashes at Trent Bridge.

14. 56th Australian: He became the 56th Australian to reach the 2000-run mark in Test cricket. He achieved this feat with his 43 runs knock in the fifth Test of the ongoing Ashes at The Oval.

15. Unique record: During the first Ashes Test at Cardiff, Rogers s 95 became the fifth batsman to score a half-century in seven matches on a trot without any of the seven being a hundred, according to Fox Sports. 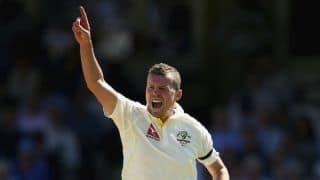