Gayle and Bravo were dressed up in their cool party attires and were seen alongside the Renegades Women's team members waiting for the clock to strike 12.

World Boss Chris Gayle entered into the New Year 2016 in his own style. As cool as he is, Gayle is known for his ever chilled out mood and is an entire party animal and he did not fail to do so this time as well. Gayle was seen partying with his West Indies teammate Dwayne Bravo while welcoming 2016. Both Bravo and Gayle are a part of Melbourne Renegades this season. They were dressed up in their cool party attires and were seen alongside the Renegades Women’s team members waiting for the clock to strike 12. Bravo shared a picture of themselves on Instagram saying, “3hrs away for 2016 chilling with some cool chicks Renegades women’s team members” Read: Sachin Tendulkar, Virat Kohli and other wish fans Happy New Year on Twitter

Later, Bravo shared a couple of videos that captured the ‘world boss’ with his famous and innovative dance moves.

In one video, Gayle had been challenged by Bravo for a specific step and the talented hard-hitter of cricket took no time to match up while looking awesome in a glittery New Year’s special outfit.

Just having some fun

Bravo wished his fans and friends a very happy New Year and added that 2015 was a great year for him. He wrote, “Thanks to God first of all for a great year 2015 thanks to all my fans also want to wish everyone a great 2016 blessings #Champion” 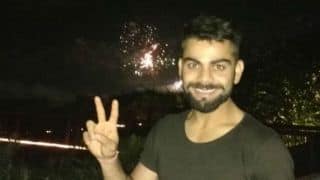