During the much anticipated India-Pakistan match in Kolkata, the legendary actor will be singing the Indian national anthem during the customary pre-match ceremony.

Superstar Amitabh Bachchan and his actor son Abhishek are avid cricket fans. Both make it a point not to miss important matches of Team India at special events like the World Cup and World T20. When India won the 2011 World Cup in Mumbai, the father-son duo had celebrated by taking to the roads in their open-roof car. When India played Pakistan last year during World Cup 2015, Amitabh had turned commentator for the first time in his life.

Come March 19, and Amitabh will once again take up a new role. During the much anticipated India-Pakistan match in Kolkata, the legendary actor will be singing the Indian national anthem during the customary pre-match ceremony. Renowned Pakistani singer Shafaqat Amanat Ali Khan will sing the Pakistani anthem.

To reprise his new role and catch the live action, Amitabh arrived in Kolkata on Saturday morning. Accompanying him was his son Abhishek, who shared the picture through his official Instagram account with the caption that read: “Bachchan boyz in da house!!! Let’s do this India!! #comeonindia #Wt20 #kolkatabound #IndvsPak”

In the past, Amitabh has proved to be a lucky mascot for Team India, with his presence at the stadium ensuring an India win everytime. He along with millions of Indian fans will hope that the winning trend continues on Saturday too, and India keep their World Cup record against the arch-rivals intact. 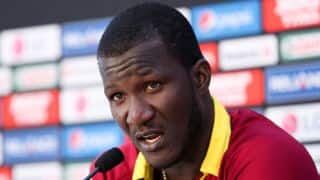