The reporter stopped only after an official from the MCG stepped in and requested him to stop.

Weird things are happening in the game of cricket with controversies at galore. After Chris Gayle asked a reporter out and a 15-year-old scoring thousand runs, here’s another interesting incident. A cricket journalist was caught watching hardcore porn during second Test between Australia and West Indies at Melbourne Cricket Ground (MCG). The journalist whose identity has not been revealed watched pornography while writing a report in the press box, while the others watched him in disbelief. That match also ended in the favour of Australia as the hosts won by 177 runs thereby continuing their dominance against the West Indians. Australia retained the Frank Worrell Trophy by winning the first two Tests of the 3-match Test series.

According to The Guardian, Australia‘s deputy sport editor Russell Jackson, the journalist who was the “accredited member of the media” shocked everyone around him as he kept on switching between his report on the game and “constant stream of hardcore pornography.”

The reporter stopped only after an official from the MCG stepped in and requested him to stop. Jackson wrote in his blog, “Off field though, there are also a lot of things you see that aren’t much fun. Last week in the Melbourne Cricket Ground press box I was staggered to note, on the third morning of the Test and for the entire day thereafter, an accredited member of the media sitting in front of me tapping away at his company laptop, but tabbing between his match report and a constant stream of hardcore pornography.”

He said, “I could barely believe what I was seeing. The thing that initially staggered me was the sheer audacity of it, that the presence of both female and male colleagues, who were sitting metres away with clear views of his screen, hadn’t been enough to deter him and that he felt perfectly comfortable doing it in full view. Welcome to Blokesworld.”

“I mention this admittedly extreme but also entirely truthful account of the scenario primarily to set a scene — one, in my experience, that plays out in any number of workplaces where men still outnumber women. It’s a scene of male entitlement and arrested development,” Jackson added.

West Indies have not been at their best but honestly, was the game so boring? 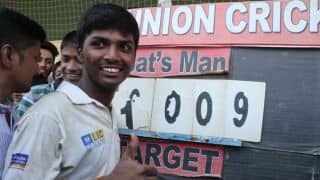