Australian cricketer Phil Hughes passed away at the St. Vincent’s Hospital, Sydney after succumbing to injuries. He was struck at the lower back of his head and suffered head injuries. At the time of his death, he was 25-years-old.

“It is my sad duty to inform you that a short time ago Phillip Hughes passed away,” Dr Brukner’s statement read.

“He never regained consciousness following his injury on Tuesday. He was not in pain before he passed and was surrounded by his family and close friends. As a cricket community we mourn his loss and extend our deepest sympathies to Phillip’s family and friends at this incredibly sad time.”

“Cricket Australia kindly asks that the privacy of the Hughes family, players and staff be respected.”

Here are the tweets which mourned the passing away of Hughes.

No no no no no. RIP Phillip Hughes

We are extremely sad to announce that Phillip Hughes has passed away at the age of 25 pic.twitter.com/RjIWcqlT2v

We extend our most sincere condolences to #PhillipHughes’ family. Phil will always stay in our hearts! #RIPHughes pic.twitter.com/9pbXKYVXY8

The Big Bash League is incredibly saddened by the news that Phillip Hughes has passed away at the age of 25. pic.twitter.com/TK6qMjuIXB

Heart broken! A very dark day. You will be missed, Phil Hughes. My prayers and thoughts go out to his family & friends.

Shocked and saddened. Phil Hughes you will live on in our hearts. RIP worst day in world cricket #peace #PhilHughes

Pakistan’s cricketing fraternity is saddened by the passing away of Phil Hughes. All our thoughts & prayers are with Phil & his family. #RIP

Sad day for cricket @CricketAus Phil Hughes RIP. Knew him whilst he came over to MI, thorough Pro..will miss you. @mipaltan

For eternity the spirit of Cap No. 408 #RIPPhilHughes

Absolutely shocked to hear the news of Phil Hughes passing away! Thoughts and prays are with his family as well as Sean Abbott!

Totally , totally sick inside and have no words.thinking and praying for friends and family. #RIPPhilHughes

Totally blown away and deeply saddened to hear of Phil Hughes passing. Thoughts are with his family and team mates. #RIPHughsey

My heartiest condolences go out to phil Hughes’s family..a very sad day for cricket..hope it never happens on a cricket field again..

Thoughts are with Sean Abbott too. Stay strong young man…it’s not your fault. #cricket #PhillipHughes

Such terrible news with the passing of Phil Hughes. Our deepest sympathies to his family.

RIP you little champ, we are all going to miss you ! Love, prayers to all the Hughes family xxxx

Deepest sympathy’s to Philip Hughes’ family. I’m in complete shock. @seanabbott77 stay strong, our thoughts are with you too. Total accident

RIP Hughesy you will be sadly missed by all bro, Can’t get much more of a genuine amazing human, #RIPPhillipHughes

Devastating news, Phillip Hughes #RIP you will be sadly missed by us all, thoughts & prayers go out to the Hughes family.

My thoughts and prayers are with family and friends of Phil Hughes. RIP you little legend #brus

So sad to hear of Phil Hughes passing. A sad day for the whole cricket family. Rest in peace mate.

Thoughts go out to Phillip Hughes family and the entire cricket community on this sad day. He was an incredible cricketer #Gonetosoon #RIP

Unbelievable to hear the news of Phil Hughes. Condolences to his family an close friends. R.I.P mate.

Sad to know that Phil Hughes is no more.. Worst day in cricket.. May God gives strength to his family.. R I P Phil..

Sad and terrible day for the entire cricketing fraternity. RIP Phil.. Our thoughts with Phil’s family and friends.

My heartfelt condolences to the family of Australian cricketer Phil Hughes on the sad demise.

On behalf of all at Hagley Oval, may we offer our condolences to Phil Hughes’ loved ones & fellow cricketers. RIP. pic.twitter.com/sRNF3yLzX3

Our deepest condolences to fam & friends of Phil Hughes, our friends & colleagues @CricketAus & all cricket loving people of OZ. A sad day.

Devastated to hear the news about Philip Hughes.A huge talent and a great Australian lost too soon. We will never forget you #CricketFamily

Just heard. In shock. My deep condolences to the family of Phillip Hughes.

Rip ..Philip Hughes ..darkest news of the cricket history ..our thoughts and prayers are with his family ..

Can’t believe it #philhughes has passed away, what a tragic waste of a fantastic young mans life #RIPHughesy, just awful news

Very sad news to wake up to. Thoughts and prayers go out to the family and friends of Phil Hughes. #RIPHughesy

Not at all fair! Hughsey U deserved much more life man. Cricket cannot be this cruel to anyone. Please God..

Thoughts and prayers with Phil Hughes all the way. Fight it out mate. You are a top man. All the strength goes out to you and your family.

Rest in peace Hughesy. I am really going to miss you. You were 1 of the great blokes and I will never forget you. #408 will live on forever.

Very very sad news,at such a young age.just not fair.may God giv strength to his family and friends and for Sean Abbott too.#RIPPhilipHughes

I still can’t believe it’s true. RIP Phil Hughes. Condolences goes out to his family. May God be with them through this tough time. #Sosad

May you RIP Hughesey. Words cannot explain one’s feelings right now. Prayers are with his family, friends and Teammates.. #RIPPhilHughes

You will be missed maaaan. So kind person you were pic.twitter.com/ijT4m7n9Rg

Woke up to the news of Phil Hughes passing away. RIP buddy. Thoughts and prayers to friends and family. What a sad day.

There are just no words to express the sadness I feel. The world has lost a great man!

Shocked and sad…a dark day for the http://t.co/WypCAuALSy phil hughes.thoughts and prayers are with his family and friends.

Absolutely devastated to hear that Phil has passed away. Thoughts and prayers with his family and friends. #RIPPhillipHughes

Woken to the horrific news about Hughesy ! I cannot describe the sadness I feel for the Hughes family & fellow cricket players, so so sad

Honoured to have spent the last few months with Hughesy. Absolute gun cricketer and even better young man.#numb #408

Just an absolute tragedy that Hughesy is no longer with us. He was such an awesome young man, RIP buddy, shattered… http://t.co/avDtc8deoR

Gutted and shattered from the passing of Phil Hughes… RIP mate…

Very sad to hear the news that Phil Hughes died last night, he was a great talent taken far too soon. #RIPPhilHughes

The #BasinReserve joins the rest of our #CricketFamily in remembering Phillip Hughes. pic.twitter.com/fzMRphcHmw

This is the saddest day in the world of cricket..a young man gone too soon #RIPPhillipHughes

RIP Phil Hughes. Gone too soon. Thoughts and Prayers are with you and the family. Shocked.

Totally saddened by the passing of our cricket brother and friend Phil Hughes. Terrible loss! Deepest condolences 2 his family! #RIPHughes

RIP Hughesy, absolutely gut wrenching news. Feeling for your family, friends and everyone involved. You're an absolute legend.

Can't quite believe the news. Devastating. My thoughts go out to Phil Hughes' family and friends. Thoughts also with Sean Abbott.

We all play cricket as a family… Really sad & shocked with the news of Phil Hughes.. Special Condolences to his whole family.. Wil miss u

Cuz I miss you so much, never has someone had such an impact on my life, my career, my outlook. devastated and upset. Love you bro #RIPPhil

Horrible to hear the passing of Phil Hughes. Gone way too soon. Condolences to family and friends. R.I.P

You defined character, courage and most of all laughter, you will be missed by many my friend. RIP #PhillipHughes

Devastated to hear the news about Phil Hughes this morning. My thoughts are with his family at this tragic time

Such a tragic news of Phillip Hughes… RIP..prayers for his family members.

I still can't believe the devastating news about #PhilHughes. My condolences to his family. RIP

This is the worst day in cricket that I've known, Can't imagine what the Hughes family are going through. Our thought are with them!!

@CAComms #PhillipHughes– We mourn his loss and extend our deepest sympathies to Phillip's family and friends at this incredibly sad time.

My prayers are with Phillip Hughes and his family.

Devastated to hear of Phil Hughes' passing. Such a sad day for everyone. Condolences to his family and friends. Champion of a man! RIP

Sad to hear the passing of a Phil Hughes. My thoughts go to his family, friends and anyone who played with him. #RIPHughes

Shocked and sadden by the news of Phil hughes. Condolence to his family and friends # RIP

Saddened by the news of phil Hughes passing away ….condolences to family n friends ….R.I.P pic.twitter.com/TWaMFmngeK

Brothers in arms, RIP mate. I will always walk out there forever knowing your by my side. Love you BRAZ!! pic.twitter.com/Qxq2Jy0Pyx

Hughesy. Tried to put it in words, but there are none that do you justice. Will miss you mate. Devastated. #RIPPhillipHughes #408

Shocked to hear about Phil's passing away! My heartfelt condolences to his family and friends! May his soul rest in peace! Feel for Abbot!

Terribly terribly sad news. Thoughts are with Phil's family, friends and all that knew him. #CricketFamily #RIPPhilHughes

Truely saddened hearing the news of the passing of Phil Hughes! My thoughts are with all his friends, family & colleagues! #RIPPhillipHughes

Life is so unpredictable!shocked and saddened especially when a friend leaves you to early!RIP Phil! Condolence to family n friends

Undoubtedly the most horror day of modern world cricket,,totally stunned after I heard about phill Hughes,,all my condolences wth his fam!!

Such a tragic day for the Cricket world. My thoughts are with Phil Hughes Family, Friends and Teammates. #RIPPhilHughes

Untimely death of Phil Hughes is reminder to keep doing what u love #gone2soon we are not here forever. Condolences from the MI family

A man living his dream playing the sport he loves ,a sad day for cricket, as a parent of 2 boys who love cricket i can imagine what his poor

Saddened to hear about Phil Hughes. Terrible day for cricket. RIP Phil. may God give strength to ur family,loved ones in this difficult time

Forever Not Out in My Heart Braz! ❤️ #RIPHughesy #408 #63NotOut pic.twitter.com/wuqonY5BlW

Shocked at the terrible news. RIP Phil Hughes. Condolences to his family and friends during this time.

A terribly sad day for world cricket. May your soul RIP Phil Hughes. My condolences go out to his family, friends and @CricketAus colleagues

What an absolute tragedy, the sad news of Phil Hughes makes me sick in the stomach. RIP my brother,pleasure competing against you

Spare a thought for poor Sean Abbott too.He will need all the support possible to help him try & get through this #CricketFamily #CricketAUS 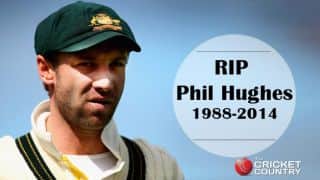 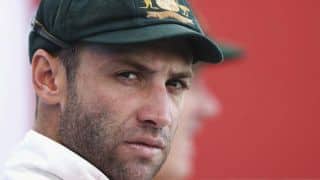