The cricket world paid tribute to Brett Lee through Twitter.

It was his last professional match and there was no steam lost. Brett Lee ran-in and bowled like he always had, almost doing the job for his side Sydney Sixers. He gave away one run in his first over, two in the second and picked up two wickets in his final one. Perth Scorchers went on to win the Big Bash League (BBL) title but Lee once again won the hearts of the fans.

Lee was an asset to any side he played for and for years was one of the main bowlers of the successful Australian side. Along with Glenn McGrath and Jason Gillespie, Lee formed together the most feared and effective pace attack.

Earlier this month, Lee announced his retirement from the sport at the end of the Big Bash League andon Wednesday, he played the last game of his career.

The cricket world paid tribute to the speedster through Twitter.

Congrats to both teams @ScorchersBBL @SixersBBL for a great Final! and in particular @BrettLee_58 who has been a star! #greatcareer

Thanks for the memories @BrettLee_58. What a champion. pic.twitter.com/Qmjgl2vuf6

Congrats @ScorchersBBL. What an end to a outstanding tournament. Great to see @BrettLee_58 go out with a brilliant last over. #BBL04

Well done @BrettLee_58 on a magnificent career. Was a pleasure to play along side you and even against when ducking 150kmh thunderbolts!

Great game #BBL04Final Congratulations @ScorchersBBL but what a finish to a great tournament .. How about that from @BrettLee_58 ..Awesome!!

And Whiteman goes first up! @BrettLee_58 is on a hat trick on his final ball in cricket! Fairytale stuff on the cards! #BBL04

No no no no. This is unreal @BrettLee_58

Congrats to @BrettLee_58 on an outstanding career. Always enjoyed the challenge of batting against him! Played it tough but fair. #respect

Brett Lee as a kid is the cutest: pic.twitter.com/p994Y11JEC

The great @BrettLee_58 has never done a hammy in his career. Did one on the final ball. Couldn’t have bowled a super over. #superstar

Too much action at end to get in a tweet but @BrettLee_58 @shaunmarsh9 Nath Lyon awesome stuff. Well done @ScorchersBBL back to back #BBL04

How good is this? #leefairytale?

The most exciting last three balls of any cricket match! #BBL04

In his last ever game Binga truly showed why he has the heart of a champion. What a player! We’l miss him deeply #ThanksBinga 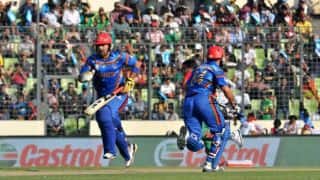