MS Dhoni announced his arrival in international cricket with a swashbuckling innings of 148 against Pakistan at Visakhapatnam in 2005.

MS Dhoni announced his arrival in international cricket with a swashbuckling innings of 148 against Pakistan at Visakhapatnam in 2005. Promoted to bat at No. 3 in his fifth One-Day International (ODI), the wicketkeeper-batsman smashed 15 fours and four sixes enroute to his maiden ton, taking India to 356. It was the second game of the six-match ODI series against Pakistan that summer.

A few months down the line, Dhoni was picked to make his Test debut against Sri Lanka and then toured Pakistan in 2006. Deja vu! In the second Test against Pakistan at Faisalabad, which was Dhoni’s fifth, he smashed 148, which also featured four sixes.

The coincidence is quite intriguing: the maiden hundreds in ODI and Tests came in the second match of the series, and both were Dhoni’s fifth match of the format. Both were against Pakistan and the scores were exactly the same 148! Even the number of sixes in both innings was the same four! Howzatt for coincidence! 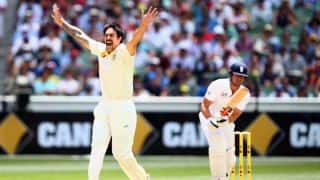