First-Class match played over 339 days!
By

It was the debut match of Frederick Reynolds, a dramatist. The match started on July 23, 1795.

In 1827, the dramatist wrote, “I, for the first and last time, played against the celebrated formidable, [David] Harris. In taking my place at the wicket, I almost felt as if I was taking my ground in a duel, and my terrors were so much increased by the mock sympathy of [John] Hammond, [Billy] Beldham and others round the wicket that when this mighty bowler, this Jupiter Tonans, hurled his bolt at me, I shut my eyes in the intensity of my panic, and mechanically gave a random desperate blow, which, to my utter astonishment, was followed by a loud cry all over the ring of ‘Run, run’. I did run; and with all my force; and getting three notches.”

On the final scheduled day, Leigh’s XI needed 36 to win. However, the play was supposed to resume on August 17. But, due to some reason players could not be assembled.

The season was over and the match was forgotten. On June 28, 1796, the match resumed and Leigh’s side won by three wickets.

Later on, ACS Publications produced the Great Cricket Matches 1772-1800 in 2010, and the scorecard was split in two. One featured the progress of the fourth innings till July 25, 1795 and the other till the end of the match. 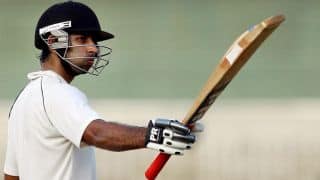