The first-ever Test match was played between Australia and England at the Melbourne Cricket Ground (MCG). It was a timeless Test which started on March 15, 1877 but it got over in four days.

Australia won the toss and batted first. Australia were all out for 245, to which opener Charles Bannerman contributed 165 before retiring hurt with the score on 240 for seven. Bannerman did not resume his innings. England replied with 196 Billy Midwinter scalping five wickets for 78 runs. Australia fared even poorly in the second innings, all out for 104 as England’s new ball bowler ended with figures of 34-16-38-5. Needing 154 for victory, England were all out for 108 Tom Kendall taking seven for 55 to leave Australia winners by 45 runs.

Hundred years later, in March 1977, Australia and England yet again faced each other at the Melbourne Cricket Ground for the Centenary Test. And Australia won yet again. But guess what the margin was of Australia’s victory? 45 runs the exact margin 100 years earlier! 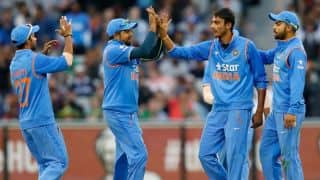