Sardesai first met Nandini at Berry's Restaurant, which was next to the Brabourne Stadium.

If you think that the cricketers in the early 1960s were not as romantic as those of the modern era, think again!

Apparently, Sardesai first met Nandini at Berry’s Restaurant, which was next to the Brabourne Stadium, when she was holidaying in Bombay after her exams. The two then met at Ahmedabad where Sardesai was playing an Inter-Varsity game. And, two months later Sardesai played a Ranji Trophy game in Baroda, where Nandini was studying at MS University. Their love blossomed.

Sardesai was picked for the 1962 tour of the West Indies, but the batsman’s heart was pining for his 17-year-old love back in India. So the two decided to write a love letter to each other every single day! Nandini, however, was scared that her parents would find out about her love affair and persuaded the postal clerk to ensure that the letters from the West Indies reaches her hand directly and not to give it to anyone else. Waingankar writes that by the end of the three-month Caribbean tour, the two had written 90 letters to each other!

“Half of my love letters used to be spent in correcting Dilip’s English, but that love was very much there. The teacher in me was born there,” says Nandini in the book

India vs Australia, 3rd Test, Day Four at Melbourne: Pick of the tweets 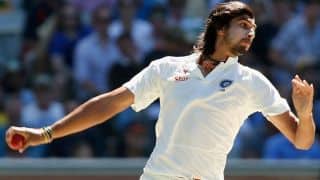