Zimbabwe were heading towards a massive loss against South Africa in the 2005 Centurion Test, when Mark Boucher decided to needle Zimbabwe's captain, Tatenda Taibu.

Modern wicketkeepers have a role other than traditional keeping wickets. No, the reference here is not to batting. Present day wicketkeepers often have to be chirpy behind the wickets to disturb the equilibrium of the batsman. When a batsman is all concentration trying to tackle the thunderbolts or unravel the mysteries of spin bowlers, the last thing he wants is the opposition getting under this skin by verbal taunts.

Mark Boucher is a classic example of giving batsman the lip service. Zimbabwe were heading towards a massive loss against South Africa in the 2005 Centurion Test, when the Proteas ‘keeper decided to needle Zimbabwe’s young captain, Tatenda Taibu.

As Taibu defended a Nicky Boje delivery, Boucher mocked, “The only time you look to score is when you have got only one seamer on the field.”

And as the Zimbabwean drove the ball through the covers, Boucher taunted, “That is a big shot, Tatenda. Where was your mouth at Cape Town when we had a full seaming attack? We have got one seamer and all of a sudden you have got a big mouth man!”

Boucher sustained his sledging. ” you may be averaging in single figures on this tour. What are you averaging? You must know your average. Nine? Ten? Nine or 10? I think it is nine. Maybe 9.5. So, we will give you 10.”

That was some verbal lash from behind the wickets! 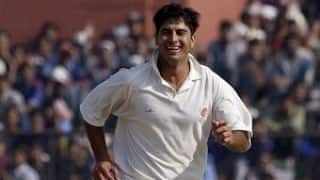