Only one of the first 17 deliveries was a legitimate one and the umpire miscounted and called over after five balls.

When we think of the most expensive overs in cricket, we immediately get to recall the exploits of Garry Sobers, Ravi Shastri, Herschelle Gibbs and Yuvraj Singh. One over and 36 runs, though incredible is still imaginable in modern cricket but how about the above scoreboard?

New Zealand cricketer Bert Vance gave away 77 runs in one over in a First-Class match between Canterbury and Wellington in February 1990.

Here’s what happened: It was Wellington’s last match of the season and all they needed was a win to secure the title. They set a target of 291 off 59 for Canterbury and the match headed for a draw.

It was Wellington’s last game of the season and they needed to win to ensure that they secured the title. On the final morning they declared their second innings, leaving Canterbury to chase 291 in what turned out to be 59 overs. Canterbury had lost eight wickets for 108 and just when it seemed they would lose, Lee Germon and Roger Ford held the fort and the match headed for a draw.

Erv McSweeney, Wellington’s captain and wicketkeeper, then hatched a plan and asked the experienced batsman Vance to bowl the penultimate over, the idea being allowing Canterbury to score a lot of runs, so that they could reach close to the target and perhaps take a risk in the final over in attempt for a win. And the historic over began on 196 for eight, with Germon, who later in his career led New Zealand, batting on 75.

Vance began a string of deliberate no-balls, which were also loose full-tosses and Germon kept on dispatching them around the park with the fielders making no effort at all to stop it.

Only one of the first 17 deliveries was a legitimate one and the umpire miscounted and called over after five balls.

Not just the umpire was confused, even the scorers and scoreboard operators lost track of the bizarre happenings. The last over was bowled by Evan Gray and Canterbury needed 18 to win, and Germon continued his hitting, scoring 17 off the first five balls.

Roger Ford faced the last ball and when they required one to win off it, he just blocked it but could he be blamed? Only after returning to the dressing room, the batsmen knew about the situation as the bewildered scorers hadn’t updated the scoreboard yet.

All the efforts from Wellington went down the drain as their strategy backfired. They were penalised four points for a slow over-rate and for violating the spirit of the game! 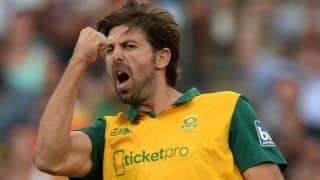