There have been few other stories behind his famous nickname but recently Dravid himself revealed how he got the name.

It is often said that former Indian cricketer Rahul Dravid got the nickname of The Wall because of his ability to stay at the crease for a long period. There have been few other stories behind his famous nickname but recently Dravid himself revealed how he got the name. Also Read: When hotel guests complained about weird noises coming from Rahul Dravid’s room

In a recent episode of What the Duck hosted by famous stand-up comedian Vikram Sathaye, Dravid was asked, So when is the first time you heard The Wall ? Dravid replied very modestly by saying, I can t remember exactly the first time but I know where it sort of came out from, where it originated. I think, it probably came out after one of my long, typically, may be boring innings but when I saw the headline, you know The Wall .

Adding to it, Dravid said he thought it was probably given by a youngster which according to him was a very clever move. I think later on, a reflection after going through my career, I really thought that it was really clever boy or girl sitting on a desk in some news paper office somewhere. Actually, looking into the future and sort of decided, Okay, lets name him The Wall today in a really positive sense. But also we can flip that around for our future headlines, which could be The Wall crumbles or another break in The Wall , or ‘The Wall’ fell down. As it happened, when I went through a bad patch, later on, I saw those headlines elsewhere in the newspaper. So, I think someone really clever in a newspaper office somewhere sitting there decided you know this is a good one for the future. Also Read: When a fan girl refused to leave Rahul Dravid’s house

Well, this is what Dravid thinks behind his famous name The Wall and he is probably right as well. 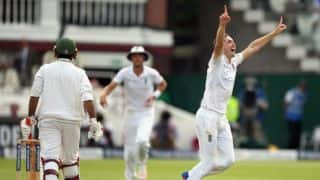