The writer narrates an incident prior to leaving for a tour of New Zealand that underlines the all-pervasive power of carrying Sachin Tendulkar cricketing gear.

One of the most readable cricket books in recent times is Vikram Sathaye’s, “How Sachin Destroyed My Life but gave me an All Access Pass to the world of cricket”.

Sathaye is known as a stand-up comedian par excellence, but this book shows why he is a brilliant writer who knows how to package gems to make a book gripping. The writer provides interesting insights into the many cricketers he has been close with over the years. It is his understanding of the game that has made cull anecdotes that make for interesting read.

The writer narrates an incident prior to leaving for a tour of New Zealand that underlines the all-pervasive power of carrying Sachin Tendulkar cricketing gear. Writes Sathaye: “As a cricketer, I have never carried a bat for my team, but I did it once for Sachin. I remember we were leaving for the 2009 New Zealand tour a week later than the Indian cricket team. Just before I was to leave, I got a call from his wife Anjali saying that she wanted me to carry Sachin’s bat for him to New Zealand as it was made by the bat manufacturer to suit the New Zealand conditions. The bat was packed in the box with his name on it. From the time time I entered the Mumbai Airport to the time I landed in Auckland, at least 15 people asked me about this parcel. It was simply crazy, but the power of that box was such that the airlines even allowed me to carry excess baggage. I had become a kind of VVIP because of the parcel I was carrying. The authorities were considering it their moral obligation to ensure that the bat reached the Master safely and on time, because in case it didn’t and he didn’t get runs, they would not gave been able to forgive themselves forever. That’s what you call impact!”

That was as far as the magnetism of Tendulkar among the masses, and which is not entirely surprising knowing the kind of adulation he gets wherever he goes. But the anecdote about the bat that followed is truly an eye-opener because it is something that one has neither seen nor heard before. Sathaye’s account of what he saw when he entered Tendulkar’s hotel room bowled him as it will most of the readers.

Writes Sathaye: “It was a rainy day in Wellington before the first match when I went to his room to deliver the bat. When he opened the room, I saw something unreal. And I thought I had entered a carpenter’s workshop. Apart from the India colours, his kit bag and clothes, there were insane number of glues, tools and apparatus lying there. Every time you met Sachin in his room during a match, you would see something that would intrigue you. I’ve seen carpentry box which had an entire tool kit which would make even the best interior designers proud. Just like a warrior who would tests and service his weapons, Sachin would sit there trying to do various things to his bat to get the right balance. He says, ‘It would be difficult to find a manufacturer while on a tour who could understand your needs and fix a problem, so it was better to carry your kit. I am like a carpenter of the team; I would carry sandpaper, superglue, bat tape, steel wool, and the whole team depends on me for this. I spend hours to ensure that the bat has the right balance and weight distribution. The final test of any bat is the sound it makes when you tap it with your finger. I know that sound since school and till the time I do not get I would work on the bat day and night.’ “ 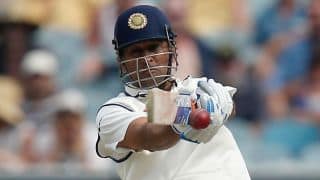