The stump microphone once caught Herschelle Gibbs calling 'unruly' Pakistani fans, a "bunch of animals", a remark that got him banned for three international matches.

Former South African opener Herschelle Gibbs had this uncanny knack of inviting trouble and finding himself at the centre of grave controversies.

In January 2007, during the South Africa’s first Test match against Pakistan at Centurion, Gibbs was caught on stump microphone, referring to a section of unruly and misbehaving Pakistani fans as “a bunch of bloody animals” and “f***ing baboons” who should “go back to the zoo.” The incident happened after his teammate Paul Harris was verbally abused by the fans.

The obviously irked Pakistani management made an official complaint to the match referee Chris Broad, as they believed Gibbs had violated the International Cricket Council (ICC) rules through his racist comments.

Broad ruled that the fans might have provoked Gibbs, but his remarks were indeed “racially offensive” and he was handed a two-Test ban.

Gibbs appealed his ban, as he believed that he didn’t make any racial remark to anyone. ICC then changed the ban to one Test, one Twenty20 game and one One-Day International match, after ICC code of conduct commissioner Richie Benaud, the former Australian captain opined, “I certainly do not consider Herschelle to be a racist.”

He was however found guilty of “language or gestures that offends, insults, humiliates, intimidates, threatens, disparages or vilifies another person on the basis of that person’s race, religion, colour, descent or national or ethic origin”.

A livid Pakistani skipper, Inzamam-ul-haq lashed out at Gibbs’ behaviour, “I am very upset because every player has to behave (with) responsibility on the field. No one has the right to use abusive or offensive language against any country or its people under any circumstances.

Gibbs didn’t do a very nice thing and these sort of things can have a bearing on relations between teams.

I am a firm believer that sports should be kept away from controversies and racist problems.”

Gibbs’ father, Herman came strongly in his son’s defence, “Herschelle has never been racist in his life. Both of my kids grew up in a mixed school at a time when other kids the same age attended segregated schools. The ICC has failed us.”

According to Gibbs’ autobiography, ‘To The Point’, Cricket South Africa supported him and the charges against him had even surprised the team manager Goolam Rajah, who had said him, “You’ve got Muslim family; how can they call you a racist?”

Gibbs on this controversy

In ‘To The Point’, Gibbs mentions that he has no regrets about the “bunch of animals” remark he directed towards the Pakistani fans and it was all a tactic to keep him out. He also strongly denied on the racism allegations.

Here are some excerpts from the book:

On the incident “I’ve never seen fans misbehave to such extent at a cricket match. For the first two days they went really crazy, as if they were bladdy possessed. They made a huge noise and even kicked Rashard, my son, and his mom, Liesl, out of their seats when they took over the area next to the pitch entrance that leads up to the changing room, where they wanted to shake hands with, or throw idiotic insults at, the players as they left the field.

All of us Proteas were getting pretty irritated and unfortunately the stump microphones picked up our displeasure. I was standing at gully, Graeme Smith was at slip and we were both looking at these morons. We agreed that a little verbal retaliation as in order. ‘Stop acting like a bunch of ***king animals!’ I said. I can’t remember what Graeme said.”

Being singled out “I mean, we all had something to say about those supporters on the day, but after listening to the recording, it was decided that mine was the one voice that they could identify. I listened to the recording later, at the hearing, and you could hear Graeme’s voice loud and clear. He still laughs about how he got away without being charged to this day. I guess I had to take one for the team.”

On allegations of being a racist “Fortunately, the Proteas management were behind me on this one. You could call me many, many things, but a racist was a bit of a stretch, to say the least. Especially concerning Muslims. I’m coloured, for goodness’ sake. I’ve got four Muslim aunts and about 10 Muslim cousins. How could I be racist? My damn family is Muslim.”

The tactic “To be honest, I think it was a tactic aimed at getting me out of the team rather than them being mortally offended by the ‘racial’ slur. It was a gambit to disrupt the Proteas more than anything else.”

(Suvajit Mustafi consumes cricket for lunch, fiction for dinner and munches numerous other snacks throughout the day. Yes, a jack of several trades, all Suvajit dreamt of was being India’s World Cup winning skipper but ended up being a sports writer, author, screenwriter, director, copywriter, graphic designer, sports marketer, strategist, entrepreneur, philosopher and traveller. Donning so many hats, it’s cricket which gives him the ultimate high and where he find solace. He can be followed at @RibsGully and rivu7) 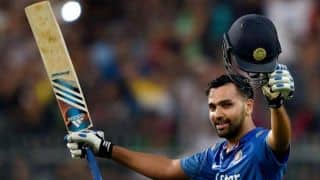