None of the New Zealand casualties had to face the kind of embarrassment Ewen Chatfield did.

Indian cuisine is a bit too spicy for those used to eating bland food. It’s quite common to find foreigners avoiding such food. And those who get adventurous often find themselves in tears literally and figuratively.

The New Zealand side that toured India in 1988-89 was one such victim of the infamous “Delhi Belly” with many of its team members down with a roaring stomach bug during the Bangalore Test. Things got so worse that the New Zealand team had to send a SOS to the television commentary box where Jeremy Coney, the former New Zealand captain, was doing duty. Coney, who had retired 18 month ago, got on the field as substitute with fellow commentator Ken Nicholson!

But none of the New Zealand casualties had to face the kind of embarrassment Ewen Chatfield did. The fast bowler ran in from his long run-up went past the umpire, the batsman and the wicketkeeper straight into the pavilion! Chatfield got back on the field only after 15 minutes in a new pair of flannels! 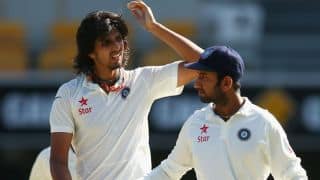