The wrath of Harold Larwood

The wrath of Harold Larwood
By

Harold Larwood was relaxing in a village green, watching a cricket match being played. The players did not know who he was. The visitors were a man short and the captain asked him whether he could play.

Larwood said he could play a bit.

He was made to field at long on at both ends. After a long while during which bowlers had tried fruitlessly to break a partnership, the captain turned towards Larwood and asked if he could bowl a bit.

He bowled his first ball from two steps, an off break which struck the batsman on the pad bang in front of the stumps.

“Not out,” said the umpire, a member of the home team.

The next ball was a leg-break, which touched the bat on the way to the keeper.

“Not out,” said the umpire.

Larwood had had enough. He went back and charged in his customary 20 yards, and hurled down the next ball. Two stumps were flattened one askew as the batsman wondered what had hit him.

Larwood turned to the umpire, who was watching with his jaw hanging out near the floor. He politely asked, “We very nearly had him this time, didn’t we?” 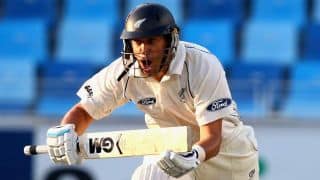