Over a fortnight since a senior doctor of Delhi's premier AIIMS hospital committed suicide “after immense mental torture by her gay husband”, focus has once again been brought on to the issue of gay men being forced into marriage with partners of the opposite sex.

When asked for proof of this, Ashwin forwarded six handwritten letters from his father over the years.

Over a fortnight since a senior doctor of Delhi’s premier AIIMS hospital committed suicide “after immense mental torture by her gay husband”, focus has once again been brought on to the issue of gay men being forced into marriage with partners of the opposite sex. This time, Ashwin, son of ex-BCCI chief N Srinivasan, has accused his father of pressing him to marry and “have progeny to carry on the lineage”.

On May 21, 2012, dna had front-paged a report highlighting how the big daddy of the cricketing world was homophobically unleashing a cycle of violence against his son and his gay partner Avi Mukherjee in order to ‘cure’ him of homosexuality.

Ashwin has now told dna that he and his partner who had been whisked away to Chennai (after Ashwin spoke of his brother-in-law Gurunath Meiyappan having connections with well-known bookies from Chennai and Dubai on May 24, 2014) are being held captive in Chennai’s tony First Avenue neighbourhood of Boat Club near his father’s residence.

“I want my father to give me my share of the family property and let me live my life like I want with my partner Avi,” he told dna and added, “We’re being held captive against our will and tortured by my father who wants me to break up with Avi, get married and have children to further the family line.”

When asked for proof of this, Ashwin forwarded six handwritten letters from his father over the years. “In his own handwriting you can see how he sees my homosexuality and partner as an aberration. He has had the benefit of a foreign education and exposure because of being well-travelled. Yet, he continues to harbour such thoughts about same-sex relationships.”

The letters, all written on N Srinivasan’s personal stationery between 2007 and 2008 indeed speak of the same things Ashwin brings up.

One of the letters dated June 20, 2007 begins on a traditional fatherly note: “Ash, you are my only son. Both your mother and I love you very much. You are aware of the hope I had for you,” and advises, “I feel you need to do certain things to help yourself”, before going to explicitly state, “I have saved money through my own hard work.

That is to say my wealth is self earned. I would like it go to my flesh and blood – I want a lineage to carry on the business. I can’t give it to strangers.Therefore I think it will be good idea for you to marry a girl acceptable to us which probably might enable creation of a lineage.”

Asking Ashwin to do his bidding if he wants to be associated with India Cements, the ex-BCCI chief says, “You need to re-enter normal society which you left years ago. Until you change, I am going to induct Rupa (Ashwin’s sister, who is married to Gurunath Meiyappan) on to the India Cements Board. You can also join the board after you accomplish the changes I have suggested,” signing off affectionately as Anna (what Ashwin and his sister call Srinivasan).

The second letter, written on September 27, 2007, reiterates the points of his earlier letter and asks him to show “discipline in expenditure”. As a postscript referring to Mumbai’s rented accommodation, Srinivasan asks him why the increased rent should be agreed upon if he stays in Chennai.

Asking Ashwin to reflect, the letter goes on to say: “See how you’re living now – man of your education and qualification, you are not prepared to face normal society. If you make an effort to change I will reward you.”

N Srinivasan wrote another letter to his son shortly after that.

After Ashwin thwarted his father’s attempts and things came to a head by the second week of January 2008, Ashwin lashed out against Srinivasan with a letter.

Stung, the father replies on January 20, 2008, his target – Avi Mukherjee. “I am in receipt of your letter talking of vague and unconnected events at different times in your private life. I see you are using all this to threaten me and extortion is clearly visible. I can see desperation – without your knowledge your letter exposes the true character of your ‘friend’ (Avi) as a criminal who breaks the law, indulges in drugs, etc. – all criminal activities.

Denying all allegations, Srinivasan adds, “But your mother is soft and I have decided to stay out till now.” Saying he has no objection to whether Ashwin chooses to live or “self-destruct,” Srinivasan adds, “You cannot say what you want because your ‘friend’ says so.”

Srinivasan is then on a roll as he goes all out at Avi. “He wants to Asset Manage you. That is why he is upset when I said my money will travel to my lineage. His plans are destroyed so he is using you to threaten and extort money.”

Just a month after that, N Srinivasan again addressed a letter to his son.

Another letter asking Ashwin to think of progeny and marriage has been written on August 7, 2008. The long break in communication Ashwin points out had led to his mother Chitra being reduced to an emotional wreck. According to him, it is in keeping with that his father takes on a pleading note.

“Although our views on your relationship and friend have honestly not changed – I can’t see why you can’t either restore family ties by spending weekends at Chennai or look at getting involved in the family business by staying here during the weekdays.”

Ashwin insists this is the ex-BCCI chief’s obsession even now. “From letters it has now come to violence and threats,” he said. When dna reached out to his father, he said, “This is a personal matter between a father and son. Why should I talk to you about it? I have no comment to offer.”

(Yogesh Pawar is deputy News Editor with DNA Mumbai. He can be followed at @powerofyogesh) 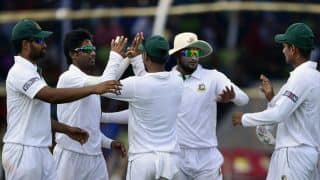