For Australian vice-captain David Warner, Indian Premier League (IPL) is a special tournament as he gets to lead Sunrisers Hyderabad (SRH) and show the world his leadership qualities. If we talk about the ongoing season, Warner has done exceptionally well so far as his side sits at the top of the points table.

The explosive opener has led SRH from the front as currently he is the second highest run scorer in IPL 9 and the only one besides Virat Kohli to get to 500 runs this season. But despite doing so well, the critics always find some or the other reason to lash out at stars. However, the critic here was not any renowned cricket expert, but an ordinary fan who suggested the pro which players to include in playing XI.

The social media user tweeted Warner suggesting he must play leg-spinner Karn Sharma in place of speedster Barinder Sran and England captain Eoin Morgan in place of his New Zealand counterpart Kane Williamson. The SRH skipper did not take this suggestion too kindly and replied to him with a tweet that read, “Can you please stop tweeting teams to me”. Perhaps the fan crossed the line here and went a bit overboard. But cricket is played on the field and it is best left to the players to decide how they want to play it.

Can you please stop tweeting teams to me. https://t.co/tMqc9jY6pW 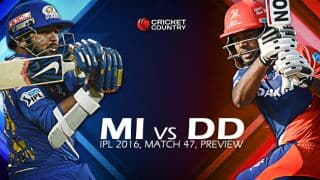