De Villiers and his wife Danielle welcome their baby AB

De Villiers and his wife Danielle welcome their baby AB

A tweet from the board quoted de Villiers as saying, “We all feel very blessed and grateful. Mother and son are both doing well.”

AB said: “We all feel very blessed and grateful. Mother and son are both doing well.” Congratulations to them both! pic.twitter.com/Nqrej9EFr8

AB and Danielle de Villiers are delighted to announce the birth of their son, AB, on Wednesday afternoon. pic.twitter.com/ZaSJQmbN8M

De Villiers, widely regarded as the best batsman in current cricket, is on a paternity leave, as his side South Africa are struggling against Bangladesh in the first Test at Chittagong. De Villiers, who played 98 Tests on a trot since his debut in 2004, missed his first Test as he didn’t want to miss the birth of his first born.

In the photographs that is doing rounds on Twitter, the new parents are looking overjoyed as the proud father is seen holding the baby. 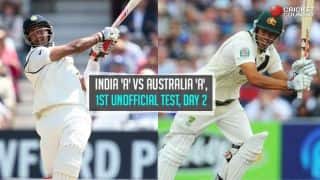 Live Cricket Score India A vs Australia A, 1st unofficial Test at Chennai, Day 2, AUS A 185/4: Visitors trail by 116 runs at stumps