Many including Ravi Shastri are of the opinion that Virat Kohli is now ready to lead in all three formats but Jones feels there is no "big rush" and also hailed MS Dhoni as one of the greatest players India have ever produced.

It was a heartbreak for Team India fans when skipper MS Dhoni could not win his team the 1st T20I against Zimbabwe despite staying there till the end. Dhoni has been a shadow of his pristine past but former Australian batsman Dean Jones feels that the Jharkhand maverick will be missed immensely once he calls curtains on his illustrious career.

Jones is currently in Kolkata, covering the first pink-ball match in India. A report from PTI quoted him as saying, “We are pretty quick to push our great players out. What Dhoni has done for Indian cricket, let him find his own time. I do not think Virat is in a huge rush to captain everything (format) at the moment. Time will come. Trust me, you will miss Dhoni a lot more in India, when he retires,” ALSO READ: MS Dhoni needs to introspect and revise his chasing style

Many including Ravi Shastri are of the opinion that Virat Kohli is now ready to lead in all three formats but Jones feels there is no “big rush” and also hailed Dhoni as one of the greatest players India have ever produced. READ MORE: Infographic: MS Dhoni and records galore

“I think that will happen soon. Dhoni will end of as one of the greatest players India have ever produced. Honestly, it is no big rush,” Jones added.

Dhoni retired from Test cricket in December 2014, midway during India’s tour of Australia in 2014. Currently, he is leading a young Indian side in Zimbabwe. India won the ODI series 3-0, his first ODI series win in 20 months. The T20I series is leveled 1-1 with the final match to be played on Wednesday.

Jones also had heaps of praise in store for Kohli. Jones said, “I find him refreshing. I love his charisma. I think he’s got personality. He walks into bat and you have no idea what’s going to happen. He’s just really cool. He is polished, now knows how to finish it off. He is the best player in the world probably now for me.”

Speaking on the comparison between Kohli and AB de Villiers, Jone further added, “It’s a big thing because I thought AB was up there. You’d to do something stupidly good to get past him. He’s got past him over the last year, ever so slightly. To watch Kohli bat is an honor,” 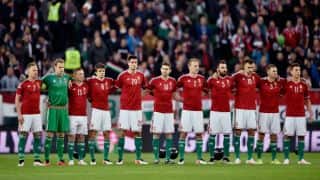