Playing under the captaincy of Sourav Ganguly, Deep Dasgupta failed to live up to the expectations of the selectors that were built upon him looking at his domestic performance.

Born June 6, 1977, Deep Dasgupta is a former India and Bengal cricketer. The wicketkeeper-batsman represented the country in 8 Tests and 5 One-Day Internationals (ODIs). Playing under the captaincy of Sourav Ganguly, Dasgupta failed to live up to the expectations of the selectors that were built upon him looking at his domestic performance. As the cricketer turns 39, Paulami Chakraborty lists out 9 facts about the cricketer.

1.  Growing up in Delhi: Though he was born in Kolkata, a major part of Dasgupta’s young age was spent in the capital of India, Delhi, and that is where he got associated with the game for the first time.

2.  Female coach: The first coach in Dasgupta’s life was, in quite a unique way, a woman. It was Suneeta Sharma, India’s first woman cricket coach who was later conferred the Dronacharya Award. Suneeta was the first to discover special talent in Dasgupta and introduced him to Gursharan Singh.

3.  Education: Dasgupta studied at the Sardar Patel Vidyalaya and later on joined the Hindu College to complete his graduation.

4.  Century on Ranji Trophy debut: Dasgupta started his career as an opening batsman and showed the class in him in the first match itself, scoring a century on debut in Ranji Trophy against Baroda.

5.  Surprise international debut: Dasgupta was included in India’s squad to South Africa in 2001. The news that he will make his international debut came to him around an hour before the toss as India’s then wicketkeeper-batsman Sameer Dighe suffered a back spasm, and Ganguly told Dasgupta that he was going to make his Test debut at Bloemfontein. That was the same Test in which Virender Sehwag scored century on Test debut.

6.  Maiden Test century: England were touring India for a Test series in 2001 and it was the inaugural Test. The visitors scored 238 in the first innings and Dasgupta provided the perfect start India needed during the chase, as he scored 100 runs.

7.  Banned for one Test: Dasgupta’s debut series was an eventful one, in which the famous incident involving Mike Denness took place. Dasgupta was one of the six cricketers along with Sachin Tendulkar, Sehwag, Ganguly, Harbhajan Singh and Shiv Sunder Das to be banned by Denness for one Test. While Tendulkar was banned for ball-tampering, Ganguly was banned for the weird reason of his ‘inability to control the behaviour of his team’. The rest, including Dasgupta, were suspended for excessive appealing.

8.  Marriage: Dasgupta admitted that his wife Amrita was the first woman he had crush on. After a courtship of three years, the two got married.

9.  Successful Bengal skipper: Deep Dasgupta has been one of the most successful captains the Bengal Ranji team has ever had. He is only the second captain after Sambaran Banerjee to lead the team to two Ranji Trophy finals in consecutive seasons.

10.  Commentator: Dasgupta is currently a well known commentator in India as he can been seen doing that very often during the Indian Premier League and was also the part of commentary team during the ICC World T20 2016 in India. 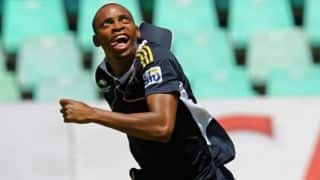