Neither they lack when it came to picking out the right line and length, nor did they struggle to find accuracy.

They say spectacles are meant for people with limited eyesight, but neither did they lack when it came to picking out the right line and length, nor did they struggle to find accuracy. Abhishek Mukherjee looks at a few bespectacled greats.

[Note: The list does not contain cricketers who played in contact lenses for most of their careers. Geoff Lawson and Sourav Ganguly, thus, miss out; the Test careers of Gordon Greenidge and Devon Malcolm seldom involved spectacles, but S Sreesanth has batted in glasses, so they qualify. Virender Sehwag and Geoff Howarth make the cut, since they shifted permanently to glasses later in their career. Another deliberate omission is Percy Fender, who had started wearing zero-power glasses only after Tom Webster started drawing his cartoons in glasses.]

1. Geoff Boycott: The perfect man to face first ball, Boycott was almost impossible to get out if he decided to go on the defensive (which he almost always did). He may take a few hours before opening up, but our side would certainly not mind a century at the end of the day s play.

2. Virender Sehwag: To get Sehwag to partner Boycott must be one of the most surreal spectacles (no pun intended) in cricket. Sehwag would easily rank among those who had revolutionised opening batting in the 21st century. The possibility of Sehwag scoring a hundred before Boycott opening his account cannot be ruled out! Don t rule out his off-breaks either.

3. Zaheer Abbas: Some call him a flat-track bully, but it cannot be denied that Zed often lit up grounds with his elegant strokeplay. The only Asian to score a hundred First-Class hundreds, Zaheer would walk in at three to help the openers accumulate more.

4. Walter Hadlee (vice-captain): Often referred The Father of New Zealand Cricket, Hadlee led his country through their early days when a draw was considered a good result for them. Even in those days he did a commendable job for his country with his ability to stick to the MCC manual. He would also have been nominated captain, but there is a better option.

5. Clive Lloyd (captain): One of the most powerful hitters of the ball, Lloyd s batting skills have often been underestimated for two reasons: he batted below the likes of Gordon Greenidge and Viv Richards; and Lloyd is synonymous to great leadership. However, Lloyd would walk into most sides as a specialist batsman (and an outstanding fielder and medium-paced bowler) who could switch gears according to the situation.

6. David Steele: When all fails, the time is nigh to summon Steele. His steely (if you mind the pun) resolve, immense pride of being British, and dour, never-say-die attitude made his unlikely frame stand out against a barrage of intimidating bowling. Steele was also a quality left-arm spinner, which would add to the balance of the side.

7. Eddie Barlow: Having someone of Barlow s pedigree to bat at seven is a blessing. Bunter had it all: he could launch into fast bowlers, often hitting them for unconventional strokes over slip (which were extremely rare in the 1960s) but notching up big scores at the same time; he had the ability to run through sides, often foxing batsmen with the brilliantly guided slower deliveries; an amazing slip fielder; and armed with the ability to light up sides with his sense of humour.

8. Dennis Gamsy (wicketkeeper): Finding a bespectacled wicket-keeper was not easy. I had considered Tariq Iqbal of Kenya (who had once accidentally caught Brian Lara) before I remembered Gamsy. Kept out (or should one say out-kept?) by Denis Lindsay for most of his career, Gamsy unusually good behind the stumps and played two Tests in the South African side that had famously whitewashed South Africa in 1969-70.

9. Daniel Vettori: Had injury not taken a chunk of his career, Vettori would have challenged Richard Hadlee s claim as the greatest all-rounder in the history of New Zealand. An accurate, probing bowler on unhelpful tracks and a batsman who improved with his day to emerge as one of his country s leading run-scorers, Vettori had it all.

10. Anil Kumble: Kumble played a major part of his career in contact lens, but wore easily distinguishable glasses in his early days even during 1992-93 the season that changed his life forever. Without a doubt the chief bowler of the side, Lloyd will look at him to provide the vital breakthroughs.

11. Bill Bowes: If one takes away his last Test innings, Don Bradman s most famous duck came when he was bowled first ball by Bowes in his first appearance in the Bodyline series. Bowes refused to bowl Bodyline, but was consistent enough to finish with a bowling average of 22.33 and is certainly worthy of being the spearhead of the attack.

Vizzy (spy): He will be deployed in the opposition camp to break their morale by splitting them up and bribing a few members with outrageously expensive gifts. 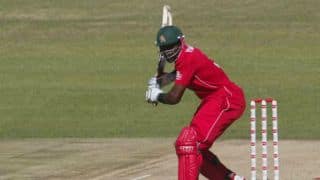