It was a special moment for young English seamer Kate Cross, who became the first woman to play in the 123-year-old Central Lancashire League.

It was a special moment for young English seamer Kate Cross, who became the first woman to play in the 123-year-old Central Lancashire League. The moment became a memorable one when she picked three wickets for 19 in her seven over spell while playing for Heywood in the 150th anniversary of the club.

It would have been more wickets for the 23-year old if her older brother Bobby Cross wouldn’t have dropped a catch. Bobby, happy with her sister’s performance tweeted.

One for the Cross family photo album. My brother dropping a catch off my bowling today. Pictures paint 1000 words!  pic.twitter.com/98SghMG5A6

Heywood chairman John Rhodes said, “Kate was selected on merit as being one of the best 11 players in the club and that in itself is credit to her for the hard work she puts in.” “I am delighted for her to have taken three wickets and to have contributed to the team winning their opening game of this, our 150th year as a club.” Kate, so far has featured in England women’s team in two Tests, nine One-Day Internationals (ODIs) and four Twenty20 internationals (T20I). Heywood defeated Clifton by eight wickets win in the first match of the 2015 CLL Premier Division season after restricting the team to 121. Cross is the latest England’s women player to play top-level men’s club cricket in England. Arran Brindle was also one of the most acknowledged women, who made history with the bat when she smashed 128 runs in the ECB Lincolnshire Premier League in 2011, for Louth XI against Market Deeping. England and Wales Cricket Board (ECB) also tweeted on this historical moment. 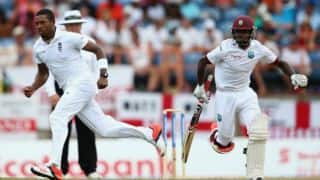