Mumbai Indians slipped to their fourth consecutive defeat in the Indian Premier League (IPL) 2015. A team that had touched great heights in its past makes a sorry sight yesterday.

Mumbai Indians slipped to their fourth consecutive defeat in the Indian Premier League (IPL) 2015. A team that had touched great heights in its past makes a sorry sight yesterday.

Nishad Pai Vaidya picks five reasons why Mumbai find themselves in a muddle.

While Mumbai managed to retain their five main players in Rohit Sharma, Kieron Pollard, Lasith Malinga, Ambati Rayudu and Harbhajan Singh, they weren’t successful in building a team around them. Every three years, players are released, with teams permitted to keep only five at max. They build the team around them, while attempting to get a new set, with possibly a few old ones. Mumbai lost out on numerous stars of their successful 2013 and the new side lacked the punch.

Back in 2014, Mumbai had the choice between Lasith Malinga and Mitchell Johnson. It made more sense to retain Johnson as he had just come off that Ashes campaign and was in the form of his life. Instead, Mumbai chose to keep faith with its tried and tested. Malinga hasn’t been the same force since. His pace has dropped and those yorkers aren’t all that lethal. Perhaps the batsmen have also devised plans to tackle him.

Mumbai have had problems at the top. Last season they tried numerous pairs before settling on to Lendl Simmons and Michael Hussey. This year, Hussey was let go and Aaron Finch was brought in. Ideally, they should have had Simmons in the side from the first game, given his form last year. Instead, Finch came in. To make matters worse, he injured himself.  Mumbai have no choice but to stay with Simmons this year now.

Mumbai desperately need an Indian pacer to back Malinga consistently. With only four foreigners allowed, they cannot have another overseas seamer coming in as the other three spots are occupied. They do not have a good Indian pacer in their ranks. Had they drafted in a current Indian player or even a former one, it could have added to their bowling. Last year they had Zaheer Khan and Praveen Kumar. While that may not have worked as well as they would have hoped, they do bring experience to the table.

The one thing that may be stopping Mumbai maybe a rigid mindset. It is something along the lines of retaining Malinga ahead of Johnson. Even now, when Malinga is clearly not the same force, they aren’t all that willing to try Mitchell McClenaghan or a Marchant de Lange. You wouldn’t know how they would work until you try them out. 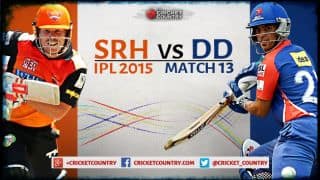