Will this interesting trivia bring fortune to Pakistan side, who have never won any match against India in World Cup tournaments?

Religion does not play a part in sports but it does divide borders and has an impact on the globe. India and Pakistan share a historical rivalry, be it cricket or any other means. It all started in 1947, when India got divided and Pakistan came into existence. From there on, the rivalry began and since then the political situation has not been the best. ICC World T20 2016, Super 10, Pick of the Tweets: India vs Pakistan at Kolkata

India is known for its pluralistic society and secularism. Religion has never come in the way of merits. Though, predominantly a Hindu populated nation, India’s diversity makes it special. Coming to India-Pakistan cricket matches, it is termed as mother of all sporting rivalry. Pakistan have never beaten India in any World Cup match, be it 50 overs or 20 overs.

Ahead of their match at ICC World T20 2016 at Eden Gardens, their 11th meet in World Cup event, we come up with an interesting trivia.

India’s first played Pakistan in a World Cup game in 1992. Since then, one or more Muslim players have been part of the Indian team , whenever they have played Pakistan in a World Cup match. In the 1992, 1996 and 1999 editions of the ODI World Cup, India was led by a Muslim captain, Mohammad Azharuddin. Then in 2003, there was Zaheer Khan in the side. Further, in the inaugural World T20 2007, there were Irfan Pathan and Yusuf Pathan. Zaheer was a part of the World Cup side of 2011 and World T20 side of 2012. In World T20 2014 and World Cup 2015, India had Mohammad Shami leading their pace battery.

Once again, they are playing against each other but this is the first time when there is no Muslim player in the Indian XI in a World Cup clash against Pakistan. Shami could not make it to the XI at his home ground in Eden Gardens. Will this interesting trivia bring fortune to Pakistan side, who have never won any match against India in World Cup tournaments? Well that’s depend on the match results and let’s just enjoy it? Logically, it should not. For now, let us enjoy the match. 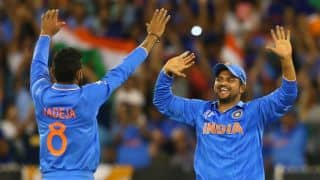