DUing the second day s play between India and England at Lord's, the 18-year-old offered a helping hand to the ground staff.

Two days after he was called on to bowl a few deliveries to India s batsmen during a nets session at Lord s, young Arjun Tendulkar was on Friday seen assisting the ground staff at cricket s spiritual home.

Tendulkar junior is part of the MCC Young Cricketers training at the indoor cricket academy at Lord s, and during the second day s play between India and England, the 18-year-old offered a helping hand to the ground staff.

Not only has he been training with @MCCYC4L recently & but he has also been lending a helping hand to our Groundstaff!#ENGvIND#LoveLords pic.twitter.com/PVo2iiLCcv

Tendulkar made headlines last month when he played his first Youth Test for India Under-19s in Sri Lanka. He played both four-day matches and took three wickets while scoring 0 and 14. 2nd Unofficial Test: Hanuma Vihari century takes India A to 322/4 vs South Africa A on Day 1 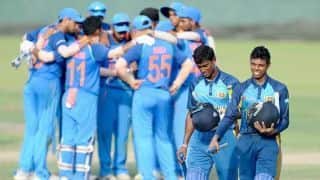