Glenn Maxwell: 10 interesting things to know about the Australian marauder

Glenn Maxwell: 10 interesting things to know about the Australian marauder

A Twenty20 (T20) superstar and a worthy One-Day International (ODI) player, Maxwell has played some of the most outrageous innings one can think of.

Glenn Maxwell, born October 14, 1988, is one of the most explosive batsmen in the world at present. A Twenty20 (T20) superstar and a worthy One-Day International (ODI) player, Maxwell has played some of the most outrageous innings one can think of. On his 28th birthday, Shiamak Unwalla looks at 10 interesting things to know about the Australian marauder.

1.  The Big Show: He might not be the ‘World Boss,’ but Maxwell is deservingly known as ‘The Big Show.’ His teammates and the media picked it up and ran with it, but Maxwell himself dislikes the name and has expressed his desire to break free of the title. He said in an interview, “I desperately tried to shrug it off but the thing is when you fight nicknames like that that you don’t like, people just keep running with it. I’m trying to ignore it now and hopefully it disappears soon and I can just be called Maxy.”

2.  IPL millionaire: Maxwell was by far the highest paid cricketer at the IPL 2013 auction, where he was bought by Mumbai Indians for US$ 1 million. Extraordinarily, the MI management ended up picking him for just a handful of matches and later let him transfer out.

3.  Big match player: Maxwell had to endure a string of indifferent performances leading up to ICC Cricket World Cup 2015. He was perhaps a bit lucky to be included in Australia’s squad for the World Cup, but completely vindicated his selection with 324 runs in six innings at 64.80 and an unbelievable strike rate of 182.02. His string of scores included 66 against England, 1 against New Zealand, 88 against Afghanistan, 102 against Sri Lanka, 44 not out against Pakistan, and 23 against India. He also took six wickets.

4.  Over of a lifetime: In October 2014, two days before his 26th birthday, Maxwell entered the record books when he bowled one of the most unimaginable overs in ODI history. It was the third ODI between Australia and Pakistan at Abu Dhabi, and the ‘hosts’ needed two to win off the final over with two wickets remaining. Maxwell did the unthinkable: he bowled a double wicket maiden as Australia won by a run. He became the second man in history to defend two runs in the final over after Chris Pringle.

5.  The fastest 50, Part 1: Maxwell proved his enormous hitting prowess quite early in his career. He hit a 19-ball fifty for Victoria against Tasmania in 2011, still the fastest half-century in Australia’s domestic one-dayers.

6.  The fastest 50, Part 2: Maxwell has a tendency to score fastest 50s. He also has the joint-fastest half-century — off 18 balls — for Australia in ODIs. He got to the landmark against India in Bangalore in 2013. Simon O’Donnell’s knock came against Sri Lanka at Sharjah in 1990.

7.  The fastest 50, Part 3: Maxwell was not done with scoring the fastest 50s for Australia. Along with David Warner, he holds the record of fastest T20I half-century as well, also off 18 balls. He got there when he blasted Pakistan for at Mirpur in 2014.

8.  Hurricane Maxwell: Perhaps one of the biggest indications of Maxwell’s awe-inspiring match-turning abilities came in a List A match in 2013. Australia A were languishing at 152 for 8 against India A when he launched a most spectacular counterattack, hitting 145 not out off 79 deliveries to propel Australia A to 298.

Maxwell also has quite a temper, though it rarely comes to the fore. He once got so frustrated at being dismissed in a Champions League T20 (CLT20) 2014 match that he ended up hitting a dustbin in anger. He made up for it soon with a hilarious tweet:

Apologies to the fans for my trash can abuse. I had a long chat with the trash can afterwards and we’re on good terms now. #dentinourrship

9.  T20 superstar: Maxwell was named Player of the Tournament in IPL 2014 for his magnificent display. He was the leading run-scorer in the early part of the tournament before being usurped by Robin Uthappa, but at one stage he was unstoppable. He had a run of three spectacular innings in which he scored 95, 89, and 93 to help Kings XI Punjab smash past the opposition.

10.  Respecting a legend: After Australia won ICC Cricket World Cup 2015, their players were all busy with on-field interviews with the media. Maxwell’s case was no different. However, while giving an interview he saw a certain Sachin Ramesh Tendulkar walking past. Maxwell instinctively left the interview, ran up to Tendulkar, and hugged him. It was a simple but sweet gesture that spoke as much of Maxwell as it did about Tendulkar. 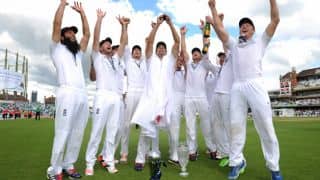