Graham Gooch is one of England’s greatest batsmen who represented them in 118 Tests and 125 One-Day Internationals (ODIs).

Graham Gooch, born on July 23, 1953, is one of England’s greatest batsmen who represented them in 118 Tests and 125 One-Day Internationals (ODIs). He was England’s leading run-scorer in Test cricket until Alastair Cook overtook his tally recently. Gooch’s career is an intriguing study — he started off poorly but rose to become a great later in his career — this despite losing three years of international cricket to a ban enforced due to his involvement in a rebel tour to South Africa in 1982. Nishad Pai Vaidya flips through the pages of Gooch’s book ‘Out of the Wilderness’ and picks 10 interesting anecdotes about that controversial phase of the former England captain’s career.

During the tour to India in 1981-82, Gooch said he was “bored and disillusioned.” As he battled boredom and egged himself to perform for his country, clandestine negotiations of a possible tour of an English side to South Africa continued. At the time, South Africa had faced isolation from the sport for over a decade due to apartheid and a visit by a team of international stature was almost unthinkable. “During that winter of unspeakably tedious cricket and endless dull evenings, I slipped into a type of depression I would not have considered possible while playing for England. So, I went to South Africa,” he wrote. The players were first made aware of the plans during England’s tour to West Indies in 1981 and things were gradually falling into place during their time in the sub-continent.

Throughout the book, Gooch speaks of his high regard for his teammate Keith Fletcher. On that tour to the subcontinent, Fletcher was asked to lead England after serving cricket for many years. However, as the negotiations of the tour to South Africa raged on, the then England skipper wasn’t told about it. Once the contracted players reached South Africa, they needed more recruits for a full-strength unit. Gooch personally called Fletcher and asked him to join, with an offer worth 45,000 pounds. However, Fletcher rejected it as he was hoping to continue to lead England and get the opportunity to captain them in a Test match at home. As luck would have it, he was sacked from captaincy in 1982 and never played Test cricket again. Gooch’s admiration for Fletcher remained intact as they went on to chart a successful run for Essex in county cricket.

Gooch’s wife Brenda wasn’t in favour of taking up the assignment in South Africa. When Gooch flew down to commence the tour, his wife was swamped with phone calls back home in England and had to deal with the outpour of reactions from different corners. She later joined him in South Africa and gave him a set of newspaper articles from the British media about the tour and a bunch of letters that landed at the Gooch household. Despite her reservations, she stood by him through the assignment and settled in as he played in South Africa. By the end of the tour, she was satisfied with the decision and saw the merits in it.

Gooch’s father remained unhappy with his decision to tour South Africa for a long time. It was almost a family crisis. Gooch senior was influenced by all the reportage and the views portrayed by the media. “He even thought I was ruining the good name of his family and he told me so when I came home at the end of the trip,” Gooch recalled. Eventually, things between them improved and Gooch senior turned up for his son’s county games thereafter.

In the aftermath of the rebel tour, Gooch was quoted by The Sun that he “didn’t care about England anymore.” Gooch denied it and sued the newspaper for that. In 1984, he was awarded a sum of 25,000 pounds in damages.

Once the English players reached South Africa, they had to pick a leader. Geoffrey Boycott and Alan Knott, the two senior cricketers on that tour, weren’t deemed fit for the job and by default, the responsibility fell upon the untested Gooch. Contrary to perceptions, Gooch was not the designated captain when the trip was put in place. It was only situational that he had to take up the job. “From then on, we were ‘Gooch’s Rebels’ and that was something I could never grow to like,” he said.

7.  Unsure of the opposition and own resources

When the Englishmen arrived in South Africa, their party comprised only 12 members. They were on the lookout for more players, but many declined, which included Fletcher. Alvin Kallicharran was up for it, but there were objections as the authorities wanted an ‘English’ team to compete in South Africa. The party was eventually complete after the series commenced as Geoff Humpage, Bob Woolmer and Arnie Sidebottom joined in. When the tour began, there was also uncertainty over the opposition. It was later decided by the authorities that a South African XI would be fielded for the big games.

The ‘rebel’ English players awaited their fate from the Test and County Cricket Board (TCCB) while on the tour to South Africa. There were suggestions that a suspension would be enforced, which was more or less an expected conclusion. Only the length of that ban remained a question. Gooch got to know about the ban on radio in Cape Town. “Three years. I could not immediately take it in,” Gooch wrote. His wife too was shocked at the length of the ban. Gooch remarked: “Three years seemed terribly harsh.” This ban was only applicable for international cricket and the players could continue to represent their respective counties.

9.  Appealing the ban and leaving a county game midway

The players decided to appeal against the ban, but not in the court of law. As a result, Gooch, John Emburey, Dennis Amiss, Boycott and Les Taylor were asked to represent the players’ interests in the meetings with the TCCB once the team returned from South Africa. Such was the situation that for last meeting, Gooch and Taylor left mid-way through a county game to attend it. Before the duo could reach the meeting in London, the TCCB had announced that they were unwilling to change their stance. Although the players had the financial backing for legal proceedings, they decided against it.

With the three-year ban in force, Gooch continued to play for Essex and had a rewarding time. The year 1984 is particularly memorable for him as Essex won the county championship. That year, he plundered over 2,500 runs in First-Class cricket, playing a huge role in their victory. Apart from playing for Essex, Gooch also spent time in South Africa, representing Western Province in a couple of seasons. As his ban was coming to a close in 1985, he decided to train with the football club West Ham United. He ultimately returned to Test cricket during the Ashes 1985 in England. 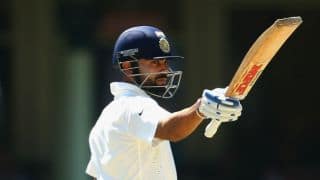 Indian selectors get it right again; but why ​Varun Aaron?