As the development of the depleting environment is the need of the hour, Maharashtra Finance and Forests Minister Sudhir Mungantiwar will be requesting Tendulkar to take initiative in its afforestation programme.

Post-retirement, ​Sachin ​Tendulkar has contributed massively towards society. He is often seen at the charity events in an attempt to raise funds for the underprivileged. Earlier in June, he also responded to Prakash Javadekar’s (India’s Minister of Environment and Forests) call and requested the masses to plant a sapling on World Environment Day. [Also Read: Bharat Ratna Sachin Tendulkar becomes the ‘Tiger Ambassador’ for Maharashtra]

As the development of the depleting environment is the need of the hour, Maharashtra Finance and Forests Minister Sudhir Mungantiwar will be requesting Tendulkar to take initiative in its afforestation programme.

As reported by the Indian Express, Mungantiwar said, “We will present this programme to Tendulkar and ask him to be associated with this either as a brand ambassador or in any other way if possible. If this does not appeal to him, we will ask him if he has any other cause or issue in mind which he would like to represent. The aim is to see if a personality of his stature can be involved with the state government’s programmes in any way that is possible.” [Also Read: Maharashtra want Sachin Tendulkar and Amitabh Bacchan to head special mission]

Earlier, Mungantiwar approached Tendulkar and Bollywood star Amitabh Bachchan to become the ‘tiger ambassador’ for the state and wrote a letter regarding the same. But the latter responded early and gave his consent first which left the forest department in a state of confusion. On Bachchan’s appointment, Mungantiwar said, “We asked Bachchan to be the brand ambassador purely because he gave us consent first. We can’t have two brand ambassadors, so we will try to work out Tendulkar’s involvement in some other way.” 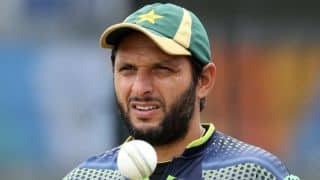