Brett Lee turns 40 on Tuesday. The right-arm tearaway pacer, known for his express pace that terrorised the world during his playing days.

1.  Juvenile Goals attained at international level: Once in an interview, Brett Lee  professed that he was in the habit of setting himself goals as a youngster and was satisfied that he had managed to achieve those goals at the international level. One of those goals was to touch the 160 kmph speed barrier and the other was to take a hat-trick in World Cup, which he did in the 2003 edition of the World Cup against Kenya.

2.  Charity: Lee may have been known for his brutality on the cricket field but he had a soft, compassionate heart on the inside. He was involved in multiple charities and his band ‘Six and Out’ was meant for the purpose of raising money for the less fortunate as the speedster himself put it. Lee supports charities such as Salvation Army, the Adventist Development and Relief Agency (ADRA) and the Make a Wish Foundation.

3.  Love for music: Lee’s passion for music almost rivals his enthusiasm for cricket. Apart from ‘six and out’ he has been involved with various music acts and has collaborated with popular Indian musician Asha Bhosale to record ‘You’re the one for me’ which attained great levels of popularity in India and South Africa.

4.  Bollywood connection: Owing to Lee’s massive popularity in India, he has landed a role in Bollywood film UNindian and has previously appeared in a cameo appearance Victory. He has also been romantically linked to Bollywood starlet Preity Zinta. The film UNindian will be his first lead role in a film however and it released in 2015.

5.  Heroics in 2003 World Cup: Lee had announced himself to the world with dominant performances right since his international debut in 1999, but his prowess was globally acclaimed in the ICC World Cup 2003 where he picked 22 wickets at an average of 17.90 and an unreal strike-rate of about 22. Some of his more memorable performances include the fifer against New Zealand which allowed Australia a big win despite being bowled out for a modest total earlier and his hat-trick against Kenya. In the same match, Lee was even guilty of breaking Kennedy Obuya’s elbow after a rising ball ricocheted off his elbow onto the stumps.

6.  Ashes 2005 moment with Andrew Flintoff: The first picture that comes to mind when ‘spirit of cricket’ is mentioned is Andrew Flintoff coming over to Lee after the conclusion of the riveting Ashes 2005, second Test where England won by a margin of two runs with Lee being the last wicket to fall. Flintoff put his arm round Lee and said “It’s 1-1, son.”

7.  Lee beamers: As famous as Lee was for his yorkers and snorters, he was infamous for his beamers which are against the spirit and laws of cricket. Lee often expressed his innocence in regards to the beamers claiming they merely slipped off his hand due to his sheer pace. His case was not helped by the fact that his beamers often came at crucial stages of the game. 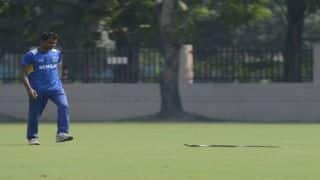