Harbhajan is India’s most successful off-spinner. But its career riddled with controversies, 11 of which are listed here .

Harbhajan Singh turns 35 today. Making his international debut way back in 1998, Harbhajan is India’s most successful off-spinner. But its career riddled with controversies, 11 of which are listed here by Suvajit Mustafi.

In the recent times, Harbhajan and Ponting might be seen exchanging hugs in the Mumbai Indians (MI) dugout, but during their playing days they hated each other’s sight. There have been numerous conflicts involving the two and it all began in 1998. In what was Harbhajan’s maiden One-Day International (ODI) series as a 17-year-old, he got Ponting dismissed stumped and got engaged in a war-of-words. He was slapped with a fine and banned for anOne-Day International (ODI).

In 2000, Harbhajan was among the first group of trainees sent to the National Cricket Academy to learn under legendary off-spinners —ErapalliPrasanna and SrinivasVenkataraghavan. Harbhajan was expelled from the academy in Bangalore for not abiding by its objectives and for avoiding physical workouts. His sponsorship job with Indian Airlines was also reviewed as he was expelled from the academy on disciplinary grounds.

3.  Altercation with police in Guwahati

Despite having a job with the police force, Harbhajan was engaged in a row with policemen outside the team hotel in Guwahati in 2002. The problem broke out when the off-spinner got into an argument with the officers after they refused to allow a photographer into the hotel. There were reports that Harbhajan injured his bowling arm after being struck by the police. An enraged Harbhajan and Indian captain SouravGanguly considered abandoning the scheduled ODI in that venue against Zimbabwe but carried on after a lot of coaxing from the organisers. Harbhajan and captain Ganguly shared a great bonding. After the ugly spat between Ganguly and coach Greg Chappell in September 2005, Harbhajan openly spoke against the coach and defended Ganguly. Harbhajan said that Chappell’s methods were too strict and there was “fear and insecurity” in the Indian camp. Harbhajan was summoned and reprimanded by his state body, Punjab Cricket Board, for his actions. He was also reprimanded by the Board of Control for Cricket in India (BCCI) from speaking to the media about Chappell.

Harbhajan, one of the brand ambassadors of liquor brand Royal Stag, appeared in its ad in 2006, without his turban. This hurt the feelings of orthodox Sikhs and led to anti-Harbhajan protests with his effigies being burnt. A religious body demanded apology from Harbhajan and asked the brand to withdraw the ad.

It all began in late 2007 when Australia toured India for an ODI series. Australia’s only non-white cricketer Andrew Symonds and several members of the Indian side were at war-of-words. There were repeated monkey chants from the crowd which led to the arrest of four spectators in Mumbai.

Later, India toured Australia and in the Sydney Test in January 2008, Harbhajan was charged with a Level 3 charged for racially abusing Symonds when he allegedly called the all-rounder “monkey”. He was banned for three Tests and charged with 50 percent of his match fees.  It led to an outrage. Relying on Sachin Tendulkar’s testimony, Judge Hansen overturned Harbhajan’s ban. The incident threatened to ruin the relation between the two countries.It didn’t end there, during that tour Australian opener Matthew Hayden in a radio interview called Harbhajan an “obnoxious little weed”.

7.  Monkey gestures and spitting at the crowd?

In what was already a heated tour, there were reports that emerged from Sydney that Harbhajan had made monkey gestures and was repeatedly spitting at the crowd during the tri-series ODI first final at the Sydney Cricket Ground (SCG). Photographers and spectators had accused him of doing so. Match referee Jeff Crowe investigated the incident and gave Harbhajana clean chit.

After the infamous series, Harbhajan continued to play the tongue war. He launched a verbal attack on two of Australia’s iconic cricketers —Hayden and Gilchrist. While he called Hayden “a big liar”, he said that Gilchrist, who pretends to be a saint, isn’t one and often says nasty things on the field. He called Australia an “arrogant side” who can stoop too low to break a player’s confidence. However he praised Brett Lee and said he was different from his teammates.

In the inaugural Indian Premier League (IPL) in 2008, Harbhajan, who was leading the Mumbai Indians (MI) slapped Sreesanth after the match between MI and Kings XI Punjab (KXIP) in Mohali. He was not only fined his match fee for the game, but he was suspended for the remainder of IPL. He was also banned for five ODIs and warned of a life-ban by the BCCI, if he repeated the offence.

10.  In a soup along with actor Mona Singh for ‘Raavan-Sita’ dance

If his on-field antics weren’t enough, he attracted more controversies off the field as well. Harbhajan’s ‘Raavan-Sita’ dance number with TV star Mona Singh on a dance show angered Sikh and Hindu communities. The then Akal Takht head, said, “I think it is unreasonable to mock at religious deities like this. Raavana is known for his evil. How can Raavana and Sita[Lord Rama’s wife] dance together? That the dance was done by two Sikhs is condemnable.”

11.  Other side of the law, now with his Hummer

Harbhajan was challaned by the Chandigarh traffic police for travelling in his Hummer without a vehicle registration number. He was issued a challan on Rs 3000 for the violation 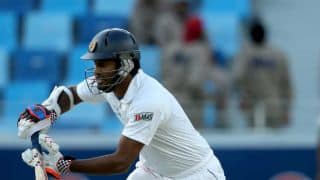