Watch here how Dhoni trolls the entire media people on his retirement plans.

If a heart-breaking defeat was not enough for MS Dhoni on Thursday night, he was once again subjected to questions regarding his retirement after India crashed out of ICC World T20 2016. Had there been any other man than Dhoni, he might have lost his cool and composure. Instead the great man, with a wide grin summoned the Australian journalist — working for Cricket Australia’s official website — to sit beside him. What transpired was something we assumed you will never get to see from an international cricket team’s captain. Read: Fans hail Virat Kohli and Team India’s run in ICC World T20 2016 on Twitter

On a serious note, Dhoni did not troll the Australian journalist — but he dished out one of his million answers to tell the world that he isn’t retiring anytime soon. The journalist asked Indian skipper Dhoni on his retirement and he got more than a fitting reply.

In almost every single press conference, on almost every single day, Dhoni responds to questions on his retirement as religiously as he goes through the fitness drills to remain fit to represent India Cricket Team. But on a day when the entire stood and stunned and heart-broken, the unrelenting media still pounced upon the Indian captain, whose reply was nothing less than legendary. Read: Cricket fraternity congratulates West Indies on their win in ICC World T20 2016 semi-final against India

When Australian correspondent asked to Dhoni about his retirement plans, Indian captain took it very sportingly and asked him to come beside him and said, “lets have some fun,” and started taking jibe at Indian media along with him. Watch here how Dhoni trolls the entire media people on his retirement plans. 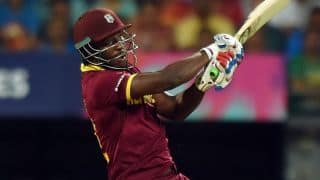