During his playing days, England great Ian Botham was a colourful character and was linked with many gorgeous women and he might never had imagined that this was coming

During his playing days, England great Ian Botham was a colourful character and was linked with many gorgeous women and he might never had imagined that this was coming. However, life has its own surprises. How you face them, rather overcome them is what matters. A champion sportsman that he was, Botham is all set to win over another challenge.

He has been married to Kath for 40 years now and the legendary all-rounder recently revealed that he underwent impotence treatment and encouraged other males suffering from sexual problems to seek help.

The 60-year-old underwent four sessions of shockwave therapy to prevent erectile dysfunction in future. A report in PTI quoted him as saying, “I’m a male and men do have problems and you have to front up to them. There is no downside to this – only a big upside. It’s prevention rather than cure. I didn’t need the treatment but I didn’t want to be worrying about it in ten years’ time.” ALSO READ: Ian Botham: 20 Beefy facts about one of England’s greatest all-rounders

The report claims that 50 percent of men between 40 and 70 suffer some degree of erectile dysfunction, the reason can be attributed to psychological, heart or diabetes problem.

It is not easy for men to openly admit about this problem and Botham made a brave move. He added, “I hope that this becomes a talking point and that people break to taboo. There’s nothing to be embarrassed about. What’s more embarrassing? This or popping some pills and saying to your partner ‘I’ll be with you in 20 minutes, I’m just waiting for this to work?’ I would say to blokes, do not be shy. If you’ve got a problem, go and sort it out.” READ MORE: The evolution of Sir Ian Botham

Botham praised his wife for her support and hopes to live a better life for a longer time.

“Kath has got a gold medal for 40 years of putting up with me. I hope this treatment will improve things in the bedroom department — that is the whole point of it. I’m trying to give myself a better life for longer,” said the all-rounder, who is regarded as one of the greatest the game has seen. 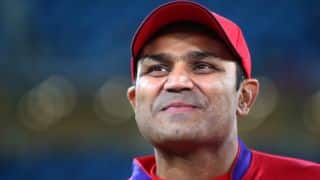