The ICC Cricket World Cup 2015 is at its final stage with New Zealand and Australia all set to battle it out for the esteemed title on Sunday at the Melbourne Cricket Ground (MCG).

The ICC Cricket World Cup 2015 is at its final stage with New Zealand and Australia all set to battle it out for the esteemed title on Sunday at the Melbourne Cricket Ground (MCG). And its only the second time that co-hosts of the mega-event are in the finals, the first being the 2011 World Cup which had India and Sri Lanka playing for the title at the Wankhede S​tadium. (ICC Cricket World Cup 2015: Full coverage)

Talking to the media in the pre-match press conference, ahead of the match on Sunday, the rival captains​,​ Michael Clarke and Brendon McCullum​,​ shared their thoughts about the clash and spoke ​at length about the preparation.

“No matter what happens tomorrow, this team has achieved a lot under pressure, a lot of expectation. To be able to make a World Cup final is very special, and if we can win, that would be icing on the cake. But the way you do that is by making sure you’re prepared, you’re ready, and skill over emotion,” Clarke answered when asked about his feelings on the Sunday match being a once-in-a-lifetime chance for him to captain Australia to World Cup glory on home soil. (READ: Michael Clarke to retire from ODIs after ICC Cricket World Cup 2015 final against New Zealand)

McCullum was quick to dismiss the question on MCG being huge as compared to grounds back home and the uphill task of defeating Australia. He said, “We’re not intimidated, I don’t think. We’re excited. I guess right through the week there’s been a healthy sort of chat about those things externally. But from our point of view we’re just going about our work in the same way. We know if we play well we’ll be tough to beat, and, yeah, that’s pretty much our preparation.” (READ: Brendon McCullum: Licensed to thrill!)

The BlackCaps beat South Africa by four-wickets in a thrilling encounter to qualify for their maiden World Cup final​, ​while Australia ended India’s seven wins steak to enter the ultimate stage for the fifth time. 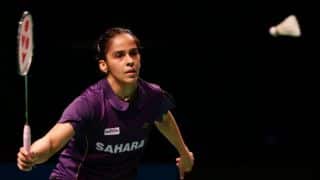