With the end of the ICC Cricket World Cup 2015, it was also the end of the Tui ‘Catch a Million’ contest. Tui brewery had launched this promotion since the start of the World Cup and it caught the eyes of several number of fans. The fans at the stadium had to wear Tui’s orange t-shirt and catch the ball in order win a million dollar. Among a lot of drop catches in the stands, seven managed to hold on to the catch and now stand to get $107,142 each from the total prize money of $750,000.

The figure was confirmed on Sunday night after New Zealand’s loss to Australia in the World Cup final. The prize pool would have been $1 million had the Black Caps won the match. The winners, Travis Committie, Jamie Gough, Sajjad Ahmad, Stu Chapman, Arjun Bhadwaj, John Raynor and Sunjay Ganda, will head to Auckland for a New Zealand cricket awards dinner on Wednesday as reported by stuff.co.nz.

One of the winner John Raynor said that he would have given up his winnings if Black Caps had won. “I watched most of the final and to be honest I’m just gutted for them. It sounds a bit cliche but I just wanted them to win for themselves.” Raynor added that the winnings were something completely out of the blue for him and his family and that they were planning to sit tight for a while, pay off a few bills and then decide what to do.

Another winner Travis Committie also planned to be smart with his winnings and make a few investments. The 24-year-old said he was planning on being smart with his share of the winnings, perhaps investing in the property market and taking his family on a holiday. “I’m feeling pretty good. I’m very thankful for the opportunity and everything. The Black Caps are amazing and I’m very proud of them regardless of the result yesterday,” he said.

Jamie Gough said at the time of the catch he was feeling numb but thought he would put the money towards his mortgage. Stu Chapman said, “I saw the ball coming and thought it was going to fall short, I just threw out my right hand and it just hung in there. Wow, I have a bit of a tingly feeling, it must be shock, but love it.”

Sunjay Ganda wants the biggest benefactors from his windfall to be his children. The 31-year-old was swamped by fans on the embankment after he plucked a one-handed catch. His was the first of the seven catches. The father of two wants to use the cash to allow his wife to extend her maternity leave by a further six months.

“She was due back at work in April, but she’s going to have the full year of maternity leave . . . we are basically sitting on one income, so I guess to have that money there we can use that to pay for the expenses we would normally pay. The first five years of any person’s life are the most important to give them the most care and opportunity, it is massive for their futures,” he said. 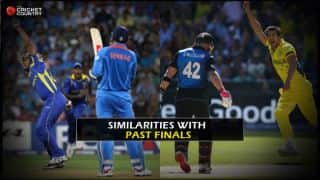