When we talk about cricketing rivalries, we mostly discuss Australia vs England or India vs Pakistan but in terms of intensity, Australia vs New Zealand contests are right up there. Not just cricketing, the nations enjoy an intense sporting history.

February 17, 2005, will always be remembered as the day that saw the first ever Twenty20 International (T20I) being played. It was Australia who played New Zealand and the venue was Auckland. Since then, both teams have played each other five times and surprisingly they have not played each other in this format since last six years.

When we talk about cricketing rivalries, we mostly discuss Australia vs England or India vs Pakistan but in terms of intensity, Australia vs New Zealand contests are right up there. Not just cricketing, the nations enjoy an intense sporting history. While little neighbours New Zealand have always held the upper hand in rugby, Australia have dominated cricket contests. Earlier this year, New Zealand beat them 2-1 in an ODI series but Australia scalped the Test series. READ: ICC World T20 2016, New Zealand overview: Minus Brendon McCullum, Black Caps aim for the first title.

This is the first time that these teams will clash in an ICC World T20 match. Ahead of the encounter, Suvajit Mustafi looks at the five previous clashes between these Oceania giants.

1.  Only T20I at Auckland in February 2005: The stage was set at Eden Park for the first ever T20I and it was a fun-filled atmosphere. Both the teams did not take the game too seriously and sported the body tight outfits from the 1980s. The Kiwis went a step further with their 80s hairstyle and facial hair. Despite the fun, the spectators had entertainment at galore in store for them.

Australian skipper Ricky Ponting chose to bat as 22 players made their T20I debut here. Andrew Symonds, who struck 32 from 13 balls, started the carnage and captain Ponting rode on his belligerent form, playing the first-ever great innings in this format. His 98 not out for over two years, remained the highest in T20Is. Australia finished with 214 and despite a 39-ball 66 from Scott Styris, New Zealand fell short by 44 runs.

Moments in the game were aplenty. In the last over of the match, Glenn McGrath in jest revisited the infamous underarm bowling incident of 1981. That incident had threatened political relations between Australia and New Zealand and Greg Chappell’s act was severely criticised by the cricket fraternity. McGrath in all fun sent out an underarm delivery to Kyle Mills and umpire Billy Bowden, the character that he is, showed the bowler a mock red card. Of course, this fun imitation of the infamous incident was well received by the Eden Park crowd. Read: Emotional scenes at Nagpur as Martin Crowe honoured ahead of India-New Zealand ICC World T20 clash

2.  Only T20I at Perth in December 2007: The next time they met in a T20I clash was almost three years later and this time at Perth. The first World T20 had ended earlier that year and both Australia and New Zealand had made it to the semi. By now the format had found its popularity. Michael Clarke led the Australian side. Winning the toss and batting first, Australia posted 186. Symonds, for whom this format was tailor-made, smacked 85 not out from just 46 balls.  In reply, New Zealand were bowled out for 132. Jacob Oram played a lone hand of a 31-ball 66 but received no support from the other batters. Debutants Ashley Noffke and Shaun Tait chipped in with three and two wickets respectively.

3.  Only T20I at Sydney in February 2009: With 64 required from seven overs and seven wickets in hand, New Zealand were matching the pace.  Australia tightened the noose and soon it was 55 from five overs. With 45 now required from four overs, Brendon McCullum cut loose and was well supported by Grant Elliott, who scooped James Hopes’ first ball to the fence and then Brendon smacked 6,4,4. 25 from three overs was not going to be tough but then Nathan Bracken pulled it back with a five-run over and then off the first ball of the Ben Hilfenhaus over, Brendon departed, courtesy an unbelievable catch from Adam Voges, and only six came from the next five balls.

Now, New Zealand required 14 from the last over and Bracken was the bowler. James Franklin was run out off the first ball. New Zealand got them to a stage where they needed 12 from two balls and Nathan McCullum could manage a four and six. The visitors lost by a run.

Earlier, Australia led by Brad Haddin chose to bat. Despite the four and a six from his last two balls, Bracken finished with figures of 4-1-16-0, and was awarded the Player of the Match. New Zealand never recovered from the ten dot balls bowled by the wily left-arm pacer.

New Zealand’s moment of glory did not come at Wellington as well. Splendid show from the Australian fast bowlers restricted New Zealand 118 and they breezed to a six-wicket win with four overs to spare. Australia gained a 1-0 lead in the T20I series.

5.  2nd T20I at Christchurch in February 2010: The thrilling contest required a Super Over to decide the winner. Choosing to bat first, the crowd at AMI stadium in Christchurch witnessed a breath-taking century from Brendon McCullum. Some of the strokes he played were absolutely phenomenal as New Zealand finished with a massive 214.

But Australia did not give up. Brad Haddin gave a brisk start, Clarke carried on the good work and ultimately it was Cameron White’s heroics that set the game. Australia needed 82 from six overs when White smacked two sixes off Vettori and later required 30 from two overs. White then plundered 18 from an Oram over. Tim Southee bowled the last over with lot of heart and conceded nine from the first five balls. Australia required three from the last ball and Clarke was on strike. He clubbed it towards long-on and Nathan McCullum dived there to stop the boundary and threw it just in time to ensure Clarke was short of the crease as he attempted the third run. Scores were level and it was a tie.

Super Over soon commenced. Southee starred in it. Australia’s innings went: 2,1,0, OUT, 1 and 2. New Zealand needed seven to win and Tait served those runs on a platter. Three runs came from wides and the third ball was cut by Guptill to the fence. Thus, the series was level 1-1. 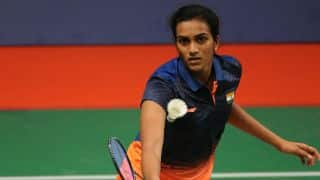