Get the live updates, most hilarious tweets and lot more on ICC World T20 2016 super 10 match between England and Sri Lanka at Delhi here.

England will cross swords with Sri Lanka in the 29th game of the ICC World T20 2016 at Delhi on Saturday. It’s a decisive game for both the teams as a victory here will change the fortunes for both the teams. England will be desperate for a win here and reserve a spot in the semi-finals with West Indies. England vs Sri Lanka at Delhi: Live Streaming, ICC World T20 2016

Sri Lanka are the defending champions in the tournament but didn’t have a great run in the recent times in this format. They have managed just a solitary win from their last three clashes. For England, after a disheartening start against West Indies, they bounced back emphatically to register two wins against South Africa and then Afghanistan.

England have some proven match winners in this format with the likes of Alex Hales, Eoin Morgan Joe Root, Jos Buttler and Ben Stokes. They have a dominant batting attack but the only area for concern seems to be their bowling.

For Sri Lanka, they boasts of Angelo Mathews, Dinesh Chandimal, Thisara Perera, Tillakaratne Dilshan and Rangana Herath. They will look forward for revival of fortunes and put up a good show. We bring you some of the best tweets from this crucial Super 10 encounter:

Pleased to meet you, Angelo Mathews, it’s been a while #ENGvSL

England win by 10 runs and are into the semi-finals

South Africa are out of #wt20. England and West Indies through. The end.

Have to admire Mathews. Never over till he’s done.

The future of a sinking cricket team depends on .@Angelo69Mathews. I am supporting England, but I cannot help but back him. 🙁#ENGvSL #WT20

Got him! Herath’s gone. Bowled by Chris Jordan. Mathews and #SL need 15 from the last over. #WT20

Imagine how the Proteas are feeling watching this in their hotel room! Sri Lanka need 16 off 8 balls!! — Neil Manthorp (@NeilManthorp) March 26, 2016

Clearly this is second best match after India vs Bangladesh in this World T20… — Broken Cricket (@BrokenCricket) March 26, 2016

Moeen just bowled the worst over of spin by an England bowler since Adil Rashid 20 mins ago #ENG#WT20 — The Middle Stump (@TheMiddleStump) March 26, 2016

Moeen just bowled the worst over of spin by an England bowler since Adil Rashid 20 mins ago #ENG#WT20 — The Middle Stump (@TheMiddleStump) March 26, 2016

2 overs left for Jordan, and one each from Willey and Stokes. Could do with getting Mathews. — Dean Wilson (@CricketMirror) March 26, 2016

That spider cam thing should be permenantly placed directly above the stumps at the batting end, maybe about 50 ft off the ground. — cricketingview (@cricketingview) March 26, 2016

Stokes catches Kapugedara – and England catch their breath. But Sri Lanka are in this while Mathews is still there. — Lawrence Booth (@the_topspin) March 26, 2016

England have made a statement this evening strong all-round side full of match winners. #WT20 — Tom Moody (@TomMoodyCricket) March 26, 2016

Can someone please explain this Boy George/Jack Sparrow phase that Dilshan is going through? — Kate Cross (@katecross16) March 26, 2016

Sri Lanka is just like that school kid who bullied classmates with senior’s help and now his classmates are bullying him coz senior left. — Smoking Skills (@SmokingSkills_) March 26, 2016

Sri Lanka is lending a helping hand to South Africa in this #WT20 but in a different cause.. #ENGvSL pic.twitter.com/iiYo89lDTz — Captain Russell (@Captain_Russell) March 26, 2016

Trying to contain my excitement at the cricket because I’m in hospital! What a game of cricket! #ENGvSL #skysports — egr94xo (@egr94xo) March 26, 2016

Sri Lanka 15-4 as Thirimanne is sent back by Matthews and Stokes’s underarm from mid-off lights up the stumps — Lawrence Booth (@the_topspin) March 26, 2016

Unless and until miracle happens, England have embarked upon journey combat battle against the best team of the tour #NZ #ENGvSL #WT20 — Shantanu Smart (@smartshantanu) March 26, 2016

It is tough to say if #ENG have actually brought their A game today or #SL is simply that worse at the momenthttps://t.co/D8MxMMBE6P #WT20 — The Furred Umpire (@TheFurredUmpire) March 26, 2016

Poor planning from Angelo Mathews Didn’t use his best bowlers in the death overs bcoz of which Eng scored 72runs in the last 5 overs. — VVS Laxman (@VVSLaxman281) March 26, 2016

SL got it correct up front but last 5 overs let that slip. It’s a competitive score and have to bat well to chase this down… — Mahela Jayawardena (@MahelaJay) March 26, 2016

So basically Eng got the bowling they don’t like in the first 15 overs & then bowling they love in the last 5. #ENGvSL #WT20 — Sanjay Manjrekar (@sanjaymanjrekar) March 26, 2016

England have 172 to defend to get into the World T20 semi-finals. That is certainly defendable. — Dean Wilson (@CricketMirror) March 26, 2016

We needed some Buttler fireworks and we’ve certainly got some. What a player! #ENGvSL #WT20 — Rob Kearsey (@RobKearsey) March 26, 2016

Thisara Perera is one huge piece of shit.And Matthews is a brainless captain. The part timers will be bowling the next 3 overs #ENGvSL — NSK (@TheUnrealMama) March 26, 2016

The most impressive thing about the #WT20 is that they couldn’t find competent umpires. — grumpy_me (@EtienneDelport) March 26, 2016

Now we start scoring! Lovely back to back boundaries from Buttler #ENGvSL — smartarsegooner (@LGoonerHoward) March 26, 2016

Death overs are always crucial even even if a team has the best bowling attack.#ENGvSL #WT20 #T20Power — M. Muneer Khattak (@M_MuneerKhattak) March 26, 2016

Thisara Parera is Shahid Afridi of Sri Lanka. He is still 26 from past 30 years. #ENGvSL — Sensitive Tomato (@GovernerOfIndia) March 26, 2016

Vandersay chimes in with a wicket. It’s a big one. Root kicking himself after holing out. #EngvSL #WT20 — Anand Vasu (@anandvasu) March 26, 2016

Exciting times. England to bat first after losing the toss. Win and they are in the semi-final. But they find it hard to set targets. — Dean Wilson (@CricketMirror) March 26, 2016

Slow start for @englandcricket but with plenty of wickets in hand, so we can start to really whack it soon. #ENGvSL #T20WorldCup — Ben Smalley (@roversfanben) March 26, 2016

Hales & Roy have scored the most proportion of runs in all #T20 cricket in this #ENG XI and at a positive Strike Rate Impact. #ENGvSL #WT20 — Impact Index Cricket (@Impact_Index) March 26, 2016

When captains can’t remember their team at the toss, after 10 overs do they suddenly think ‘Oh, let’s bowl that bloke at fine leg..’ #ENGvSL — Jonny (@Leathernwillow) March 26, 2016 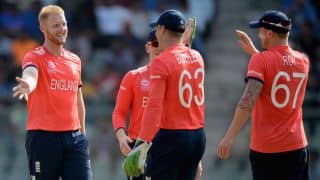 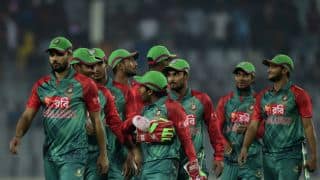